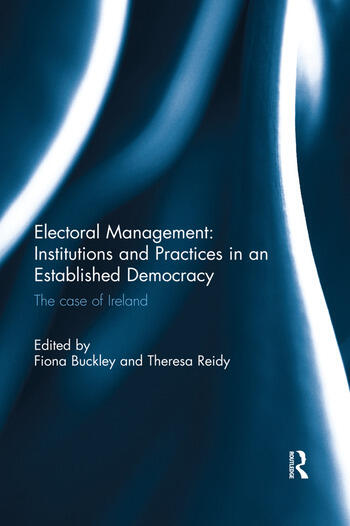 Electoral Management: Institutions and Practices in an Established Democracy: The Case of Ireland

Over the last three decades, electoral reform has moved centre stage in both new and established democracies. In Europe, the post 1989 democratisation wave brought important debates about electoral system choice and free and fair elections. But electoral reform also emerged on the agenda in a number of established democracies. Declining political participation, corruption scandals and party finance irregularities put the management of the democratic process on the political agenda. Election administration problems such as those in the Gore Bush election of 2000 thrust electoral integrity into the global political spotlight. In this edited collection, we are primarily concerned with the mechanics of how elections are run. Elections are complex administrative tasks and as International IDEA points out, they are also usually administered against a politically charged backdrop. This book brings together specialists to consider the election management process using diverse theoretical approaches and, addressing both emerging and perennial election debates such as the role of voter advice applications, election management bodies, districting, ballot design and media practices in the coverage of elections. The volume includes a number of comparative chapters which utilise data from large international datasets (VDem and CSES), several Irish case studies and an important Dutch study of voter advice applications with pioneering data. Collectively, the chapters provide insights into election administration in Ireland and many other established democracies. This book was previously published as a special issue of Irish Political Studies.

1. Managing the Electoral Process: Insights from, and for, Ireland
Fiona Buckley & Theresa Reidy

5. Fixed-Boundary Constituencies and the Principle of Equal Representation in Ireland
John Coakley

6. ‘Residents are Fearful that Their Community will Die Around Them’: Some Thoughts from Inside the 2013 Local Electoral Area Boundary Committee
Gary Murphy

7. Regulating the Airwaves: How Political Balance is Achieved in Practice in Election News Coverage
Kevin Rafter

10. Conclusion and Reflection: Time for an Electoral Commission for Ireland
David M. Farrell

Fiona Buckley is a lecturer in the Department of Government at University College Cork where she specialises in gender politics. Fiona's work has been published in a number of leading political science journals, including PS: Political Science & Politics, Politics, European Political Science, Representation, Irish Political Studies and the Journal of Women, Politics and Policy.

is a lecturer in the Department of Government at University College Cork, where she teaches Irish politics, political economy and public finance. Theresa's research interests lie in the areas of electoral behaviour and public finance. She has been co-editor of Irish Political Studies since 2012 and she has published on elections and referendums in Electoral Studies, Parliamentary Affairs and Politics.

Electoral Management: Institutions and Practices in an Established Democracy: The Case of Ireland