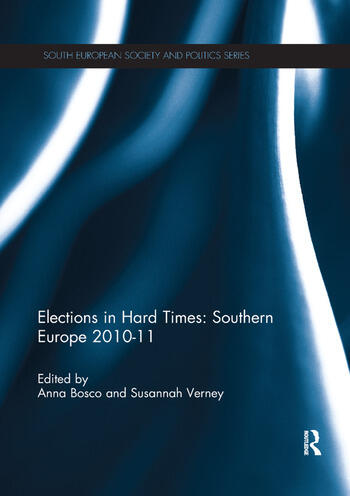 Southern Europe has been at the heart of the European sovereign debt crisis and in the vanguard of the programmes of radical economic austerity implemented to confront it. During the first two crisis years, the consequences for domestic political stability were dramatic. Across the region, 2010-11 saw the overthrow of incumbent governments, the breaking down of established political affiliations and the emergence of new political actors. The culmination was the simultaneous downfall of three South European governments in the space of eighteen days in November 2011.

This volume offers a collection of case studies of the twelve popular votes during this period in Italy, Greece, Portugal, Spain, Turkey, Cyprus and the Turkish Cypriot community. The contests include legislative, presidential and sub-national elections and a national-level referendum. In our control case, Turkey, there was no economic crisis and no government change. Elsewhere in Southern Europe, the studies indicate the progression of the crisis, from the limited disapproval of Berlusconi government registered in the Spring 2010 Italian regional election to the electoral collapse of the Spanish socialists in late 2011. The volume indicates a build-up of popular frustration with the democratic process which can only be dangerous for the future of South European democracy.

This book was published as a special issue of South European Society and Politics.

1. Electoral Epidemic: The Political Cost of Economic Crisis in Southern Europe, 2010 – 11  2. The 2010 Regional Elections in Italy: Another Referendum on Berlusconi  3. The Turkish Cypriot Presidential Election of April 2010: Normalisation of Politics  4. The Eurozone’s First Post-bailout Election: The 2010 Local Government Contest in Greece  5. The 2010 Regional Election in Catalonia: A Multilevel Account in an Age of Economic Crisis  6. The 2011 Portuguese Presidential Elections: Incumbency Advantage in Semi-presidentialism?  7. The Twilight of the Berlusconi Era: Local Elections and National Referendums in Italy, May and June 2011  8. In the Whirlwind of the Economic Crisis: Local and Regional Elections in Spain, May 2011  9. Disengaging Citizens: Parliamentary Elections in the Republic of Cyprus, 22 May 2011  10. After the Bailout: Responsibility, Policy, and Valence in the Portuguese Legislative Election of June 2011  11. No Crisis, No Change: The Third AKP Victory in the June 2011 Parliamentary Elections in Turkey  12. The 2011 General Election in Spain: The Collapse of the Socialist Party