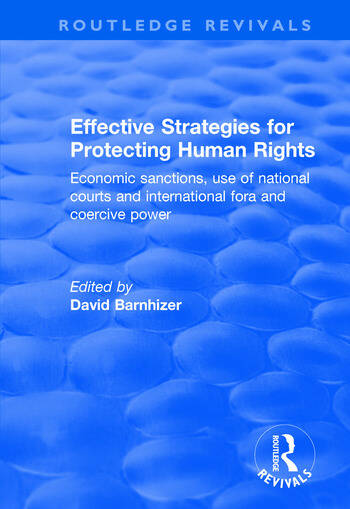 This title was first published in 2001: This book brings together the experiences of a diverse range of leading human rights advocates and activists to demonstrate strategies for protecting human rights. The volume identifies strategic problems and approaches and offers a range of strategies that hold promise for sanctioning human rights offenders and for inhibiting the behaviour of those who might otherwise engage in such activities. The contributors include, inter alia, Noam Chomsky, Justice Richard Goldstone of the Constitutional Court of South Africa who served as Chief Prosecutor of the UN War Crimes Tribunals for the former Yugoslavia and Rwanda, and David Rawson, United States Ambassador to Rwanda during the tragic genocide. Those who work in the disparate field of human rights increasingly understand the need to see the system strategically rather than piecemeal. This volume captures their insights and looks at both private and public actors, including the uses and limitations of international fora to prosecute violations. The focus is expanded to include private actions because political issues too often interfere with enforcement of human rights laws - allowing violators to hide behind the unwillingness of national governments to take action.

’With the two-volumes of Effective Strategies for Protecting Human Rights, David Barnhizer successfully combines essays from activists, theorists, critics, and notable participants in current struggles for human rights. The collectives present wise insights and challenging lessons both for those with experience and those new to human rights debates.’ Martha Minow, Professor of Law, Harvard University, USA ’These two volumes on effective strategies for protecting human rights are a wonderfully rich resource. The essays, which speak to a variety of important contemporary issues, are both thoughtful and provocative. Highly recommended for all scholars and students of international human rights.’ Michael J. Perry, Distinguished Chair in Law, Wake Forest University, USA