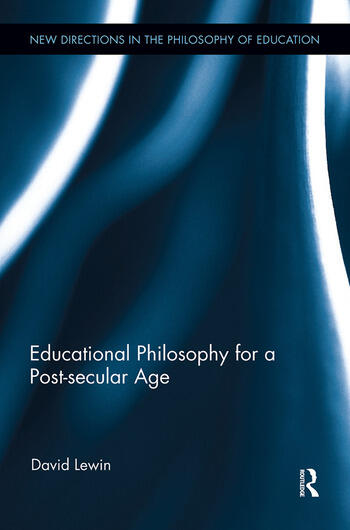 Educational Philosophy for a Post-secular Age reinterprets post-secular insights for educational theory by recognising that the persistence of religion in contemporary life raises new questions about the place of religion in education. Two common assumptions are critically examined: first, that the better educated a society becomes, the more secular it becomes, and second, that religion can and should be separated from public education. For too long, religion has had an uneasy relationship with education, being seen either as a foreign invader, a problem to be solved, or as a mechanism by which to reinforce particular religious, cultural or national identities. In order to move educational theory beyond the debates about indoctrination and competing rights between parents, children and nation states, the argument undercuts rationalist conceptions of religion and education that tend to frame the debates in terms of competing truth claims or worldviews.

Drawing on a diverse range of theological, philosophical and educational sources, this book demonstrates the continuing significance of the Christian mystical tradition to educational theory. It proposes an exploration of democratic education that brings together two apparently irreconcilable poles: the meaning of religion in education and contemporary life, and the need for a deliberative democratic process that is fit for the post-secular age. It argues that religious literacy can be served by democratic encounters in public religious education.

will be of interest to researchers, academics and postgraduate students in the fields of the philosophy of education, philosophy of religion, education policy, politics, anthropology and cultural theory. It will particularly appeal to those, of both secular and religious persuasions, interested in the place of religion in education and public life.

1. Introduction  Part One: Understanding the Frame  2. Formations of the Post-secular  3. Religion and Belief for a Post-secular Age  4. ‘Only a god can save us’…Heidegger’s God After Metaphysics  Part Two: Experiments in Reframing  5. Submission  6. Attention  7. Union  8. Deliberative Religious Cultures  9. Conclusion

David Lewin is Lecturer in Philosophy of Education at the University of Strathclyde, Glasgow, UK.

‘This volume should be required reading for anyone in the academy who believes that religion and higher learning can be neatly defined and easily kept apart. Drawing on the European hermeneutical tradition and informed by postcolonial insights, Lewin deftly describes the real-life messiness of both faith and learning and eloquently charts the many ways these two dimensions of human existence unavoidably interact and overlap with each other.’
Douglas Jacobsen and Rhonda Hustedt Jacobsen, authors of No Longer Invisible: Religion in University Education (OUP, 2012)

‘Our contemporary cultural milieu is much more complex than dogmatic secularism would have you believe. In this fascinating, important study, Lewin considers the educational significance of an emerging ‘post-secular’ reality. Drawing on sophisticated conversations in philosophy, sociology, and theology, this book begins a public conversation we need to have not just about ‘religious’ education but the importance of transcendence to the educational project as a whole. I hope it is widely read.’
James K.A. Smith, Professor of Philosophy, Calvin College, and author of How (Not) To Be Secular: Reading Charles Taylor

‘An original, important and provocative consideration of religion and secularism in the postmodern.’
Ian Stronach, Professor of Education, the University of Manchester, UK

‘The appearance of ‘cracks in the secular’ means that we all have to find more appropriate ways of honouring religious diversity in our common life together. Education needs some humbler philosopher kings; reading David’s book would make for a critical contribution to their formation. I am glad that David has written this book, I recommend it particularly to other empirically inclined sociologists of education like myself. You can be sure that when I need to ‘chill out’ with the philosophers of education I will be re-reading the chapters of David’s book.’
Dr. Beth Green is Program Director, Cardus Education. Cardus is a social policy think tank dedicated to the renewal of North American Social Architecture.

‘Lewin treats religious traditions as potential resources for educators without attributing to them any automatic authority over teachers and students. He offers a path that avoids the limited perspectives of either religious confessionalism or secularist reductionism. His argument moves beyond the tired aggression, defensiveness and mutual suspicion often displayed by religious adherents and by secular humanists. He approaches education in fresh and fertile ways, critically and creatively retrieving and applying past insights that have largely been ignored or forgotten. In synthesising Teilhard de Chardin and Tillich, Eckhart and Heidegger, John Milbank and Rowan Williams, he opens up a cluster of related elements vital for deep and worthwhile learning and pedagogy, including attention, contemplation, search, sharing and union.’
John Sullivan, Emeritus Professor, Liverpool Hope University & Visiting Professor (Theology and Education), Newman University, Birmingham, UK