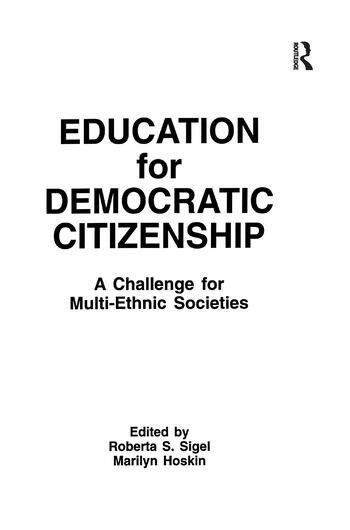 Education for Democratic Citizenship: A Challenge for Multi-ethnic Societies

It is becoming increasingly clear that members of a host nation as well as newcomers have to learn what it means to live democratically in a multi-ethnic world and to accept diversity without fear or rancor. This volume, a result of a conference sponsored by the Spencer Foundation, asks a question of increasing significance in view of post World War II immigration patterns and the spread of democratic forms of government: "What can educational researchers and practitioners do to prepare our youth for cooperative, constructive living in a democracy?" This book illustrates how six post-industrial nations -- Canada, Germany, Israel, The Netherlands, the United Kingdom, and the United States -- have met or failed to meet this challenge.

Contents:Introduction. R.S. Sigel, Democracy in the Multi-Ethnic Society. M. Hoskin, The Challenge of the Multi-Ethnic Society. Part I:The Problem of Minorities in the Socio-Political System. C. Harber, Anti-Racism and Political Education for Democracy. H. Esser, The Integration of Second Generation Immigrants in Germany: An Explanation of "Cultural" Differences. I. Rubinstein, C. Adler, The Development of Democratic Culture in a Society with Powerful Traditional Forces: The Case of Israel. Part II:Educational Institutions' Responses. I. Felsenthal, I. Rubinstein, Democracy, School, and Curriculum Reform: The "Rules of the Game" in Israel. H. Hooghoff, Government Policy and Curriculum Development With an Intercultural Perspective: The Netherlands, a Multi-Ethnic Society. I. Lister, Civic Education for Positive Pluralism in Britain. Part III:Government Institutions and Policies for Democratic Education. C.S. Ungerleider, Socialization for Democratic Citizenship: The Development of the Canadian Infrastructure. J.H. Black, Government as a Source of Assistance for Newly- Arrived Immigrants in Canada. Conclusion. M. Hoskin, Socialization to Citizenship: The Successes, Failures, and Challenges to Government.

Education for Democratic Citizenship: A Challenge for Multi-ethnic Societies