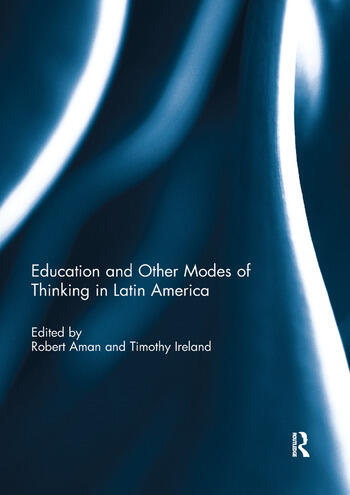 Education and other modes of thinking in Latin America

After long periods of military dictatorships, civil wars, and economic instability, Latin America has changed face, and become the foremost region for counter-hegemonic processes. This book seeks to address contemporary paradigms of education and learning in Latin America. Although the production of knowledge in the region has long been subject to imperial designs and disseminated through educational systems, recent interventions – from liberation theology, popular education, and critical literacy to postcolonial critique and decolonial options – have sought to shift the geography of reason.

Over the last decades, several Latin American communities have countered this movement by forming some of the most dynamic and organised forms of resistance: from the landless movements in Brazil to the Zapatistas in the Chiapas region of Mexico, from the indigenous social movements in Bolivia to Venezuela’s Chavistas, to mention but a few. The central question to be addressed is how, in times of historical ruptures, political reconstructions, and epistemic formations, the production of paradigms rooted in ‘other’ logics, cosmologies, and realities may renegotiate and redefine concepts of education, learning, and knowledge. Consequently, this book transcends disciplinary, epistemological, and methodological boundaries in education and learning by engagement with ‘other’ paradigms. This book was originally published as a special issue of the International Journal of Lifelong Education.

Introduction: Education and other modes of thinking in Latin America Robert Aman and Timothy Ireland

2. From Hamburg to Belem: the limits of technocratic thinking in adult learning education Carlos Alberto Torres

6. On competences and values: from the desire to educate to educating the desire of being Roberto Sancho Larrañaga

7. Performing transformation in the Community University of the Rivers Dan Baron Cohen

Robert Aman is Lecturer in Education in the School of Education, University of Glasgow, UK. His research focuses on the relationship between education, the geopolitics of knowledge and various forms of exclusion and marginalisation, drawing on decolonial theories. His book, Decolonising Intercultural Education: Colonial Differences, the Geopolitics of Knowledge, and Inter-Epistemic Dialogue, is forthcoming with Routledge.

is Associate Professor at the Federal University of Paraíba, Brazil, where he teaches on the postgraduate programmes in Education and Human Rights and is currently Director of the UNESCO Chair in Youth and Adult Education. His principal areas of research relate to education in prisons, the use of digital media in the literacy process, and international policy on adult lifelong learning and education. His most recent book, Adult Education in Retrospective: 60 years of CONFINTEA, was published by UNESCO in English, Portuguese and Spanish.

Education and other modes of thinking in Latin America