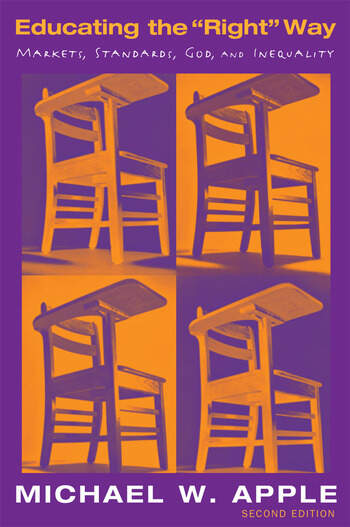 In this book Apple explores the 'conservative restoration' - the rightward turn of a broad-based coalition that is making successful inroads in determining American and international educational policy. It takes a pragmatic look at what critical educators can do to build alternative coalitions and policies that are more democratic. Apple urges this group to extricate itself from its reliance on the language of possibility in order to employ pragmatic analyses that address the material realities of social power.

Professor Michael W Apple is the John Bascom Professor of Education at the University of Wisconsin, Madison. A former primary and secondary school teacher a past-president of a teachers union, he has worked with educators, unions, dissident groups, and governments throughout the world to democratize educational research, policy, and practice. Among his many books are Ideology and Curriculum, Education and Power, Teachers and Texts, and Official Knowledge Power, Meaning and Identity. Not only has Professor Apple been selected as one of the most influential writers on education in the 20th century, but his book Ideology and Curriculum has been chosen as one of the 20 most important volumes in the history of western education.

"If there is a book that marks the beginning of a new century, with its agonies of defeat and its utopian promises, this is the book." -- Carlos Alberto Torres, author of Democracy, Education, and Multiculturalism

"No student of education can afford not to hear the story that Apple so ably tells." -- Jeannie Oakes, co-author of Because of the Kids: Facing Racial and Cultural Differences in Schools

"In this book, Apple offers yet another closer look at the conservative trends that are having an impact on teachers, schools, and communities and offers powerful alternatives that provide both hope and purpose for those who feel the burden of the many issues that he critically examines...This book is extremely valuable...Apple provides an eye-opening critique of the ways the new Right has successfully created alliances and has become increasingly influential in our public institutions. With the knowledge gained in this book. educators can be well informed and empowered to become agents of change."--Teachers College Record, May 07, 2007