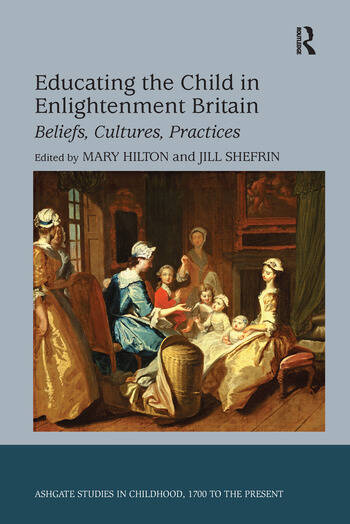 Posing a challenge to more traditional approaches to the history of education, this interdisciplinary collection examines the complex web of beliefs and methods by which culture was transmitted to young people in the long eighteenth century. Expanding the definition of education exposes the shaky ground on which some historical assumptions rest. For example, studying conventional pedagogical texts and practices used for girls' home education alongside evidence gleaned from women's diaries and letters suggests domestic settings were the loci for far more rigorous intellectual training than has previously been acknowledged. Contributors cast a wide net, engaging with debates between private and public education, the educational agenda of Hannah More, women schoolteachers, the role of diplomats in educating boys embarked on the Grand Tour, English Jesuit education, eighteenth-century print culture and education in Ireland, the role of the print trades in the use of teaching aids in early nineteenth-century infant school classrooms, and the rhetoric and reality of children's book use. Taken together, the essays are an inspiring foray into the rich variety of educational activities in Britain, the multitude of cultural and social contexts in which young people were educated, and the extent of the differences between principle and practice throughout the period.

Mary Hilton is a Senior Lecturer in the Faculty of Education at the University of Cambridge and Jill Shefrin was for many years a librarian with the Osborne Collection of Early Children's Books and a Research Associate in Arts at Trinity College at the University of Toronto, Canada.

'This book is an outstanding contribution to the silent revolution that is placing education at the heart of the cultural history of the "long eighteenth century". The editors set out to redefine education as a cultural, rather than a political, social or purely instructive practice. The editors and contributors demonstrate convincingly the innovative work that is possible outside conventional disciplinary boundaries in the conceptual space constituted through education. This is a book that sets agendas for future research and debate as it sheds light on "new ways of seeing" in the history of education. It is a book with the potential to reconfigure both history and education.' Joyce Goodman, University of Winchester, UK 'A first-rate volume that is of considerable value, both for content and for methodology.' Enlightenment and Dissent