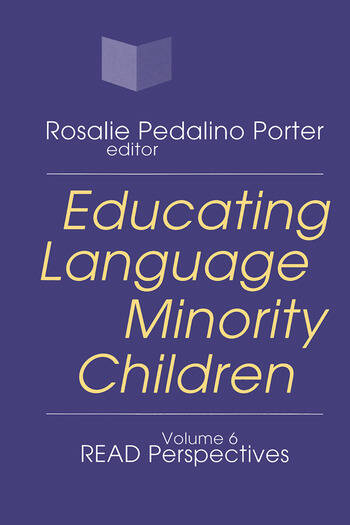 READ Perspectives, a refereed annual publication of the Institute for Research in English Acquisition and Development (READ), Washington, D.C., begins its sixth year with the theme "Educating Language Minority Children: An Agenda for the Future." Volume 6 features presentations from a Boston University conference organized by READ and the Pioneer Institute. The essays represent truly diverse viewpoints on the education of limited-English students, rare in the complex and contentious arena of bilingual education.

The lead article, "Rethinking Bilingual Education," by Charles L Glenn of Boston University, inspired the conference's organization. Dr. Glenn proposes new ways of schooling limited-English-speaking children that depart dramatically from the practices of the past 30 years. He proposes sound recommendations for revising Massachusetts bilingual education law, ideas that could well be applied in other states. Also included are

Christine Rossell's "Mystery on the Bilingual Express," a critique of the controversial study by Thomas and Collier; Rosalie Pedalino Porter's follow-up review of El Paso, Texas's programs for English learners; Mark Lopez's "Labor Market Effects of Bilingual Education"; "Bethlehem, Pennsylvania's English Acquisition Program," by Thomas J. Dolusio; Maria Estela Brisk's discussion on the need to restructure schools to incorporate the large non-English student population; several articles regarding educational reform in Massachusetts, including two by school superintendents Eugene Creedon and Douglas Sears, and one by Harold Lane, Chairman of the Joint Education Committee in the Massachusetts Legislature; and, finally, Kevin Clark's "From Primary Language Instruction to English Immersion: How Five California Districts Made the Switch." Kevin Clark's California study "From Primary Language Instruction to English Immersion: How Five California Districts Made the Switch," describes how radical changes are being carried out in a few representative school districts since passage of California Proposition 227, the "English for the Children" initiative. Educating Language Minority Children is a valuable selection of the most current thinking on policies, programs, and practices affecting limited-English students in U.S. public schools. It provides a wealth of practical information useful to educators, parents, legislators, and policy analysts, and is an essential addition to libraries nationwide.