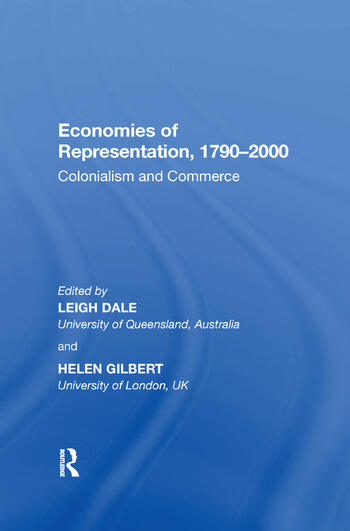 Economies of Representation, 1790?2000: Colonialism and Commerce

Although postcolonialism has emerged as one of the most significant theoretical movements in literary and cultural studies, it has paid scant attention to the importance of trade and trade relations to debates about culture. Focusing on the past two centuries, this volume investigates the links among trade, colonialism, and forms of representation, posing the question, 'What is the historical or modern relationship between economic inequality and imperial patterns of representation and reading?' Rather than dealing exclusively with a particular industry or type of industry, the contributors take up the issue of how various economies have been represented in Aboriginal art; in literature by North American, Caribbean, Portuguese, South African, First Nations, Australian, British, and Aboriginal authors; and in a diverse range of writings that includes travel diaries, missionary texts, the findings of the Leprosy Investigation Commission, early medical accounts and media representations of HIV/AIDS. Examining trade in commodities as various as illicit drugs, liquor, bananas, tourism, adventure fiction, and modern Aboriginal art, as well as cultural exchanges in politics, medicine, and literature, the essays reflect the widespread origins of the contributors themselves, who are based throughout the English-speaking world. Taken as a whole, this book contests the commonplace view promoted by some modern economists-that trade in and of itself has a leveling effect, equalising cultures, places, and peoples-demonstrating instead the ways in which commerce has created and exacerbated differences in power.

Leigh Dale teaches Australian and postcolonial literatures at the University of Queensland.

Economies of Representation, 1790?2000: Colonialism and Commerce