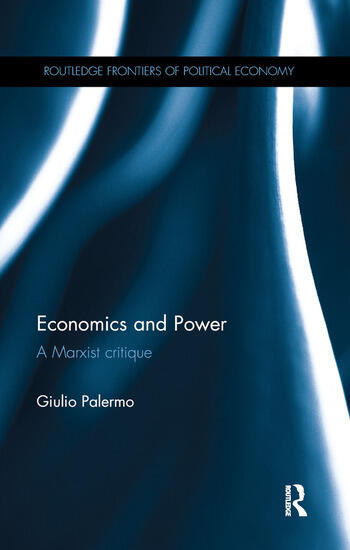 Economics and Power: A Marxist Critique

In the economic debate, power is defined and studied mainly as an interpersonal relation occurring out of perfect competition. This is a consequence of the combination of methodological individualism and the assumption of competition as a natural and everlasting coordinating mechanism, operating without any sort of coercion. This methodology, however, is not adequate to analyze the forms of social coercion that characterize capitalism.

criticizes the main theories of power developed in economic literature, analyzing ultraliberal contractualism to radical political economics, and ultimately suggesting a Marxist conception of power and coercion in capitalism. Palermo’s ontological argument is rooted in the philosophy of ‘critical realism’.This unique volume presents his main finding as being that the essential coercive mechanism of capitalism is competition. Capitalist power is not caused by a lack of competition, but by the central role it plays in this mode of production. Following this, the chapters reconstruct a Marxian conception of power where it is analyzed as a social relation and argues that perfect competition does in fact exist under the disguise of capitalist power. This book criticizes the construct of power and the underlying ideas surrounding perfect competition.

This book is of interest to those who study political economy, as well as economic theory and philosophy.

The dimensions of power in social sciences

The unidimensional view of power in economics

Structure of the book

PART I. POWER IN ECONOMICS

2. The economic debate on power

The contractual approach of Alchian and Demsetz

The property rights approach of Hart and Moore

The radical political economics of Bowles and Gintis

The theoretical results of Walrasian economics

The role of perfect competition in the debate on power

PART II. THE ONTOLOGY OF CAPITALIST POWER AND THE COERCIVE LAW OF COMPETITION

5. Marx’s critique of capital and competition

The origins of competition

Competition and the contradictions of capital

The development of competition and the process of capital subsumption

The end of competition

Bourgeois economics and the myth of perfect competition

6. Capitalism as a system of power

The ontology of power

The ontology of capitalist power

Formal similarities within opposite conceptions

Economists as servant of power

Giulio Palermo is Researcher in Economics at the University of Brescia, Italy.

Economics and Power: A Marxist Critique