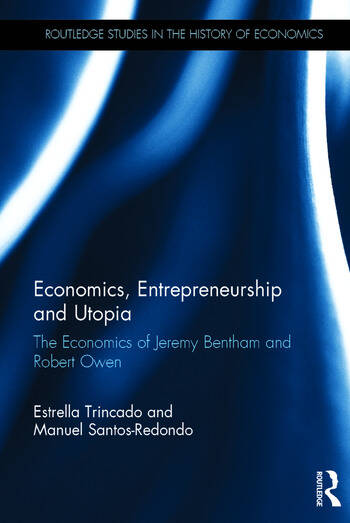 Economics, Entrepreneurship and Utopia: The Economics of Jeremy Bentham and Robert Owen

In the early 1800s, Robert Owen was a mill owner, political figure, and an advocate for social reform, and his publications attained considerable circulation. He believed that people need good working conditions in order to be encouraged to work and motivated to learn. Despite the higher costs associated with this kind of operation, compared to the traditional ones, Owen’s management resulted in increased productivity and profit. His results caught the attention of men of wealth who were interested in social reform. In particular, at a similar time, Jeremy Bentham was developing his own theories. Owen and Bentham seemed to be based on some similar ideas that the greatest happiness creates the greatest results. Their ideas developed against the backdrop of the Industrial Revolution, and growing social and economic problems in England.

Owen and Bentham were forerunners of highly relevant current theories of economics – marginalism, entrepreneurship, personnel management, and constructivism. They were acquainted with such important authors as James Mill, Malthus, Ricardo and John Stuart Mill. However, their economic theories were ruled out by classical economists, who actively tried to silence perspectives different from the orthodoxy. This book presents an innovative study of these two social thinkers and reformers, who have rarely, if ever, been studied together. This comparative study provides new context both on the social debate taking place during the Industrial Revolution, and on the development of modern social thought, in particular, the relationship between socialism and utilitarianism.

will be of great relevance to scholars with an interest in the history of economic ideas, the history of entrepreneurship, and social reform in both historical and contemporary contexts.

is Associate Professor of History of Economic Thought and Business History at the Complutense University of Madrid, Spain. He has published many articles on entrepreneurship and innovation, and cultural industries.

Economics, Entrepreneurship and Utopia: The Economics of Jeremy Bentham and Robert Owen