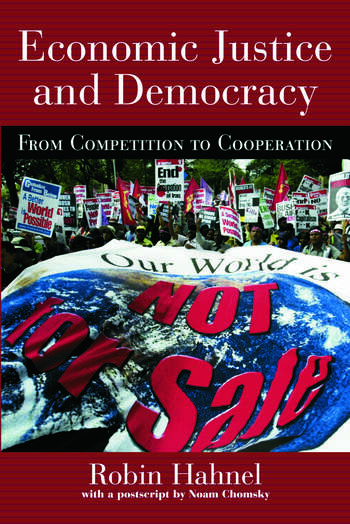 Economic Justice and Democracy: From Competition to Cooperation

In Economic Justice and Democracy Robin Hahnel argues that progressives need to go back to the drawing board and rethink how they conceive of economic justice and economic democracy. He presents a coherent set of economic institutions and procedures that can deliver economic justice and democracy through a "participatory economy." But this is a long-run goal; he also explores how to promote the economics of equitable cooperation in the here and now by emphasizing ways to broaden the base of existing economic reform movements while deepening their commitment to more far reaching change.

Robin Hahnel is Professor of Economics at American University. His most recent book is The ABCs of Political Economy. He is co-author with Michael Albert of The Political Economy of Participatory Economics. He has been active in many social movements and organizations over the past forty years, most recently with the Southern Maryland Greens and Green Party USA.

"Can cooperation and democracy supplant greed and competition as the organizing principles of our economic lives? Robin Hahnel wrestles relentlessly and insightfully with this profound question throughout this wide-ranging study. ECONOMIC JUSTICE AND DEMOCRACY provides one serious roadmap toward a more just and egalitarian society; and as such, makes an important contribution toward the revival of the socialist tradition.
." -- Robert Pollin, Professor of Economics and Co-Director, Political Economy Research Institute (PERI), University of Massachusetts-Amherst
"Robin Hahnel's book is an excellent overview of the principles of economic justice, and the practical and theoretical flaws of both capitalism and the various attempts to reform or eliminate it. But it's far more than critique; it's also a blueprint for a better society, and offers plenty of ideas on how to get there. Even if you're not fully convinced, it will make you think. And how many books do that?
." -- Doug Henwood, Editor, Left Business Observer
"Robin Hahnel breaks new ground here in articulating his vision of a participatory economy and-equally important-in showing how progress may be made toward this long-run goal within the interstices of the current capitalist system. Economic Justice and Democracy is essential reading for anyone concerned about overcoming the ravages of contemporary world capitalism and building a better society." -- Thomas E. Weisskopf, Professor of Economics, University of Michigan.
"Robin Hahnel's path-breaking book reconceptualizes our understanding of economic justice and economic democracy. This immensely readable and inspiring work should be on the bookshelf of every academic, activist and citizen who is seriously interested in creating a just and democratic world economy in the 21st century." -- Ilene Grabel, Associate Professor of International Finance, Graduate School of International Studies, University of Denver
"Robin Hahnel's new book, Economic Justice and Democracy, is an ambitious work of political history, a cogent critique of capitalism and its main contenders, and a visionary venture vibrating with hope and possibility. As such, it is a crucial book for our contemporary moment.
." -- Jules Boykoff, Whitman College
"Although written by an economist, Economic Justice and Democracy is devoid of supply-and-demand curves, technical graphs and functional equations, and, as such, this book demands an audience beyond professional economists. This book should be read widely by socialists, feminists, environmentalists, anarchists, and the manifold combinations thereof." -- Jules Boykoff, Whitman College
"Robin Hahnel has written an important book that will be of real value to all libertarian socialists... There is no doubt that this book is a major contribution and should be a taking off point for subsequent analysis
." -- Stephen Shalom, New Politics

Economic Justice and Democracy: From Competition to Cooperation