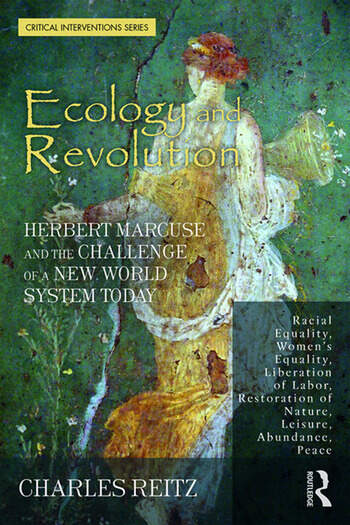 Ecology and Revolution: Herbert Marcuse and the Challenge of a New World System Today

A timely addition to Henry Giroux’s Critical Interventions series, Ecology and Revolution is grounded in the Frankfurt School critical theory of Herbert Marcuse. Its task is to understand the economic architecture of wealth extraction that undergirds today’s intensifying inequalities of class, race, and gender, within a revolutionary ecological frame. Relying on newly discovered texts from the Frankfurt Marcuse Archive, this book builds theory and practice for an alternate world system. Ecology and radical political economy, as critical forms of systems analysis, show that an alternative world system is essential – both possible and feasible – despite political forces against it. Our rights to a commonwealth economy, politics, and culture reside in our commonworks as we express ourselves as artisans of the common good. It is in this context, that Charles Reitz develops a GreenCommonWealth Counter-Offensive, a strategy for revolutionary ecological liberation with core features of racial equality, women’s equality, liberation of labor, restoration of nature, leisure, abundance, and peace.

Charles Reitz is the author of Philosophy & Critical Pedagogy: Insurrection & Commonwealth (2016); editor of Crisis and Commonwealth: Marcuse, Marx, McLaren (2015); and author of Art, Alienation and the Humanities: A Critical Engagement with Herbert Marcuse (2000). He served for several years on the Board of Directors of the International Herbert Marcuse Society.

Ecology and Revolution: Herbert Marcuse and the Challenge of a New World System Today