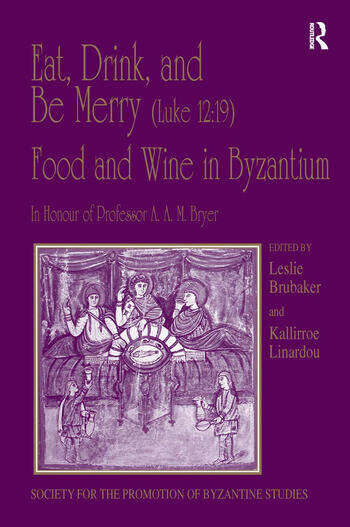 Eat, Drink, and Be Merry (Luke 12:19) – Food and Wine in Byzantium: Papers of the 37th Annual Spring Symposium of Byzantine Studies, In Honour of Professor A.A.M. Bryer

This volume brings together a group of scholars to consider the rituals of eating together in the Byzantine world, the material culture of Byzantine food and wine consumption, and the transport and exchange of agricultural products. The contributors present food in nearly every conceivable guise, ranging from its rhetorical uses - food as a metaphor for redemption; food as politics; eating as a vice, abstinence as a virtue - to more practical applications such as the preparation of food, processing it, preserving it, and selling it abroad. We learn how the Byzantines viewed their diet, and how others - including, surprisingly, the Chinese - viewed it. Some consider the protocols of eating in a monastery, of dining in the palace, or of roughing it on a picnic or military campaign; others examine what serving dishes and utensils were in use in the dining room and how this changed over time. Throughout, the terminology of eating - and especially some of the more problematic terms - is explored. The chapters expand on papers presented at the 37th Annual Spring Symposium of Byzantine Studies, held at the University of Birmingham under the auspices of the Society for the Promotion of Byzantine Studies, in honour of Professor A.A.M. Bryer, a fitting tribute for the man who first told the world about Byzantine agricultural implements.

Contents: Preface; Bibliography of publications by A.A.M. Bryer; Section I A Tribute to A.A.M. Bryer: A tribute to Professor Bryer, J.A. Minitz; Polla ta ete (repeat 3 times) to Bryer, J.Herrin; Bryer the anthropologist, R. Morris; Bryer the enthusiast, J.Haldon; Not the champagne bus, M. Mullett; Bryer and I - and the class of 1980-1985, C. Galatariotou. Section II Practicalities: Between the field and the plate: how agricultural products were processed into food, D. Stathakopoulos; Store in a cool and dry place: perishable goods and their preservation in Byzantium, M. GrÃ¼nbart; Some Byzantine aromatics, A. Dalby; Stew and salted meat - opulent normality in the diet of everyday?, J. Koder. Section III Dining and its Accoutrements: Dazzling dining: banquets as an expression of imperial legitimacy, S. Malmberg; A sultan in Constantinople: the feasts of Ghiyath al-Din Kay-Khusraw I, D. Korobeinikov; Mealtime in monasteries: the culture of the Byzantine refectory, A.-M. Talbot; From 'glittering sideboard' to table: silver in the well-appointed triclinium, M. Mundell Mango. Section IV Ideology and Representation: What was kosher in Byzantium?, B. Crostini; Eat, drink...and pay the price, A. Eastmond and L. James; The changing dining habits at Christ's table, J. Vroom; 'Fish on a dish' and its table companions in 14th-century wall paintings on Venetian-dominated Crete, A.Lymberopoulou. Section V Food and the Sacred: Divine banquet: the Theotokos as a source of spiritual nourishment, M.B. Cunningham; Being a potential saint, P. Karlin-Hayter. Section VI Outside the Empire: More Malmsey, Your Grace? The export of Greek wine to England in the later Middle Ages, J. Harris; Record of Byzantine food in Chinese texts, C. Zhiqiang; Index.

’As a tribute to the person and work of Anthony Bryer... it faithfully reflects the character and breadth of his legacy among UK Byzantinists, not to mention the degree to which he is both admired and loved. On the topic of food and wine in Byzantium, a number of the articles will become standard references for scholars who touch upon the subject in years to come.’ The Medieval Review

Eat, Drink, and Be Merry (Luke 12:19) – Food and Wine in Byzantium: Papers of the 37th Annual Spring Symposium of Byzantine Studies, In Honour of Professor A.A.M. Bryer