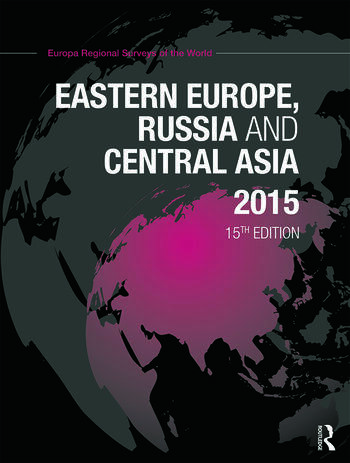 • an overview of the radically revised Constitution of Georgia that entered into effect in late 2013, substantially reducing the powers of the President and increasing those of the Prime Minister and the Government

Chapters on each country, containing:

- essays on its recent history and economy, and a chronology of events
- an extensive statistical survey of economic indicators
- a comprehensive directory of the most significant political, commercial and cultural institutions
- a bibliography of books concerned with the country's history, politics and economy.

Who's Who in Eastern Europe, Russia and Central Asia

- a directory of major international organizations and research institutes concerned with the region
- select bibliographies of books and periodicals.

Europa publications have long been regarded as premier reference resources, providing authoritative political and economic data for every country and region of the world, biographical profiles of the most influential global figures in every field, including politics, science, business, academia, the arts and the media, and unrivalled access to information on universities, libraries and other academic institutions world-wide.

Available in print and online, Europa's principal titles, The Europa World Year Book,The Europa Regional Surveys of the World, The International Who's Who and The Europa World of Learning, serve the contemporary research needs of students, academics and information-seekers in specialist and general reference libraries, government offices and commercial institutions in every country.

'... An important new guide to the region.' - Reference Reviews