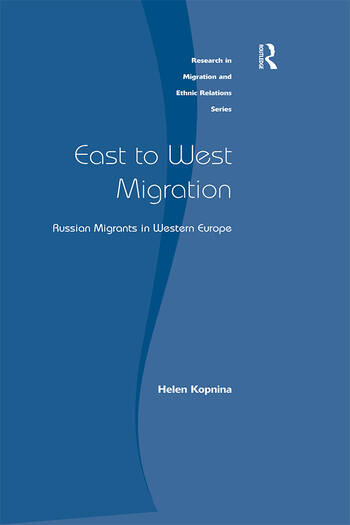 The collapse of the communist regimes in Eastern Europe brought widespread fear of a 'tidal wave' of immigrants from the East into Western Europe. Quite apart from the social and political importance, East-West migration also poses a challenge to established theories of migration, as in most cases the migrant flow cannot be categorised as either refugee movement or a labour migration. Indeed much of the trans-border movement is not officially recognised, as many migrants are temporary, commuting, 'tourists' or illegal, and remain invisible to the authorities. This book focuses on Russian migration into Western Europe following the break-up of the Soviet Union. Helen Kopnina explores the concept of 'community' through an examination of the lives of Russian migrants in two major European cities, London and Amsterdam. In both cases Kopnina finds an 'invisible community', inadequately defined in existing literature. Arguing that Russian migrants are highly diverse, both socially and in terms of their views and adaptation strategies, Kopnina uncovers a community divided by mutual antagonisms, prompting many to reject the idea of belonging to a community at all. Based on extensive interviews, this fascinating and unique ethnographic account of the 'new migration' challenges the underlying assumptions of traditional migration studies and post-modern theories. It provides a powerful critique for the study of new migrant groups in Western Europe and the wider process of European identity formation.

Helen Kopnina is Lecturer of Tourism at The School of Economics, Haarlem College, and Lecturer of Intercultural Communication and member of the lectorate at Fashion Institute, Amsterdam, both in The Netherlands.

’...provides a unique, sensitive and original insight into Russian communities in the west in the post-Soviet period. Kopnina's anthropological and highly personal approach provides an in-depth, subtle and focused view of the lives and experiences of the individuals who provide the basis for the book that is too rarely found in the literature. It is also a significant contribution to understandings of and approaches to migration and migrant communities� in the contemporary period, from a theoretical/conceptual and also a methodological perspective.’ Dr Moya Flynn, University of Glasgow, UK ’...this well-edited, handsome volume...ought to be on the shelves of all university libraries, in centres of Russian and east European studies, and in institutes of migration and immigration.’ Slavic Review