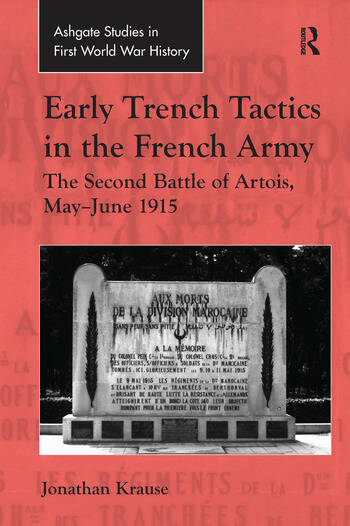 Early Trench Tactics in the French Army: The Second Battle of Artois, May-June 1915

In the English-speaking world the First World War is all too often portrayed primarily as a conflict between Britain and Germany. The vast majority of books focus on the Anglo-German struggle, and ignore the dominant part played by the French, who for most of the war provided the bulk of the soldiers fighting against the central powers. As such, this important and timely book joins the small but growing collection of works offering an overdue assessment of the French contribution to the Great War. Drawing heavily on French primary sources the book has two main foci: it is both an in-depth battle narrative and analysis, as well as a work on the tactical evolution of the French army in Spring 1915 as it endeavored aggressively to come to grips with trench warfare. This period is of crucial importance as it was in these months that the French army learned the foundations of trench warfare on which their conduct for the remainder of the war would rest. The work argues that many advanced practices often considered German innovations - such as the rolling barrage, infiltration tactics, and the effective planning and integration of artillery bombardments - can all be traced back to French writing and action in early 1915. The work argues that - contrary to received opinion - French army bureaucracy proved effective at very quickly taking in, digesting and then disseminating lessons learned at the front and French commanders proved to be both effective and professional. Such radical conclusions demand a fundamental rethink of the way we view operations on the Western Front.

Jonathan Krause is a visiting lecturer in the Defence Studies Department, King's College London at the Joint Services Command and Staff College, Shrivenham. He studied history at the University of California, Riverside (2002-2006) before earning an MA (2007) and PhD (2010) from the War Studies Department, King's College, London. Jonathan has published in both French and English on a range of topics related to the French Army in La Grande Guerre, and is an Associate Member of the British Commission for Military History.

'Early Trench Tactics in the French Army offers some interesting detail about French tactics and operations at this transitional point of the war.' H-France Review 'In many ways, the year 1915 is the black hole� of the Great War. ... Thus, JonathanÂ� Krause’s book fills a gap in the writing on the war and is very much a welcome addition.' H-War 'This book is an invaluable account of the French Artois offensive of 1915... This is an excellent book, which deserves to be widely read by everyone and anyone interested in the Great War.' Stand To!

Early Trench Tactics in the French Army: The Second Battle of Artois, May-June 1915