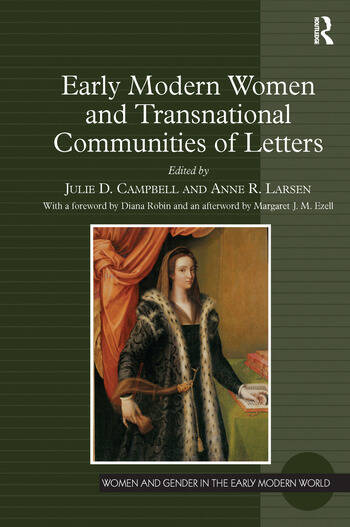 An important contribution to growing scholarship on women's participation in literary cultures, this essay collection concentrates on cross-national communities of letters to offer a comparative and international approach to early modern women's writing. The essays gathered here focus on multiple literatures from several countries, ranging from Italy and France to the Low Countries and England. Individual essays investigate women in diverse social classes and life stages, ranging from siblings and mothers to nuns to celebrated writers; the collection overall is invested in crossing geographic, linguistic, political, and religious borders and exploring familial, political, and religious communities. Taken together, these essays offer fresh ways of reading early modern women's writing that consider such issues as the changing cultural geographies of the early modern world, women's bilingualism and multilingualism, and women's sense of identity mediated by local, regional, national, and transnational affiliations and conflicts.

Julie Campbell (English, Eastern Illinois University) is the editor and translator of Isabella Andreini's La Mirtilla (2002) and the author of Literary Circles and Gender in Early Modern Europe (2006). Her research focuses on Renaissance and seventeenth-century literature with an emphasis on Continental and English women writers. Anne Larsen (French, Hope College) has published articles and book chapters on French Renaissance and seventeenth-century women writers and is the editor and translator of From Mother and Daughter: Poems, Dialogues, and Letters of the Dames des Roches (2006). She is currently investigating the writings of Anna Maria van Schurman on women's education.

Prize: Honorable Mention in the Collaborative Project category for books published in 2009, awarded by the Society for the Study of Early Modern Women 'This volume adds to the growing body of work on women's cross-cultural interchanges by exploring the reasons for a historical shift toward greater inclusion of women in public culture(s) in early modern England and Europe.' Jane Donawerth, University of Maryland, USA '... this is an impressive work that develops new understandings about the transmission of early modern European women's writings of all genres through their involvement with fellow intellectuals of both genders in transnational communities.' Renaissance Quarterly 'This collection of eleven essays, with a foreword, afterword, and substantial introduction presents early modern women's writing from England, Scotland, France, Italy and the Netherlands, from the early sixteenth to late seventeenth centuries. These essays represent a recent shift in literary historical studies of women's writing from a focus on the social and intellectual constraints experienced by female authors to the ways in which their writing was sustained and promoted by pan-European intellectual communities of men and women. ...This volume is an important resource for scholars working on women's writing and European intellectual networks of the early modern period.' Parergon ’Julie D. Campbell and Anne R. Larsen have compiled an exemplary edited volume. ... provides a fresh and convincing reconsideration of early modern women, gender, production, and community, and as such, will be of interest for literary critics and historians alike. It will also be excellent for classroom use for both undergraduate and graduate courses on women and gender, Renaissance humanism, print cultures, and religious reformation as lively analysis of lived experience.’ Sixteenth Century Journal