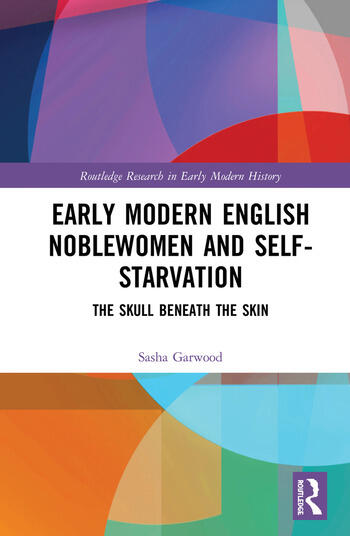 Early Modern English Noblewomen and Self-Starvation: The Skull Beneath the Skin

Early Modern English Noblewomen and Self-Starvation: The Skull Beneath the Skin is a unique exploration of why early modern noblewomen starved themselves, how they understood their behaviour, and how it was interpreted and received by their contemporaries.

The first study of its kind, the book adopts an interdisciplinary and highly detailed approach to examining women’s self-starvation between 1500 and 1640. It is also the first book to focus on this behaviour among noblewomen. Beginning with a contextual outline of gender, food and embodiment in early modern culture, the book then looks explicitly at the food behaviour of several well-known figures, including Elizabeth I, Catherine of Aragon, Mary I, Arbella Stuart, and Katherine Grey. Each case study engages with a variety of primary sources, such as letters and legal documents, as well as with literary texts, providing an in-depth exploration of the relationship between self-starvation and concepts of autonomy, sexuality, and literal and symbolic imprisonment, highlighting the body and specifically the act of eating as fundamental to identity in the early modern period and today.

Introduction; Contexts: 1. Modern vs early modern bodies: anorexia nervosa and other historically situated forms of self-starvation; 2. Fasting and food in early modern society: ‘At dinner, supper or in taverns’; 3. Women, food and early modern households, ‘None other wyse than the capitaine of a garison’; 4. The female body in early modern England - ‘Oh, that we may call these delicate creatures ours/and not their appetites!’; 5. Women and self-starvation on the Renaissance stage - ‘Dead’ ‘Dead!’ ‘Starved!’; Case Studies: 6. Catherine of Aragon and Mary Tudor: eating and identity, royalty and resistance; 7. ‘The body of a weak and feeble woman’: Elizabeth and eating, power, politics and penetration; 8. ‘With my body, I thee worship’: The tragedy of Lady Katherine Grey; 9. 'So Wilfully Bent': Arbella Stuart, starvation, strategy and survival; Conclusion: The skull beneath the skin: starvation and embodied selfhood then and now; Bibliography; Appendix: supporting studies on modern eating disorders, a selection

Sasha Garwood is an interdisciplinary scholar focusing on gender, sex and food as a nexus of cultural anxieties from the early modern period to the present. She studied at UCL and Keble College Oxford, is currently a Fellow of the Humanities Research Institute at the University of Sheffield, and teaches History at Sheffield and English Literature at the University of Nottingham.

Early Modern English Noblewomen and Self-Starvation: The Skull Beneath the Skin