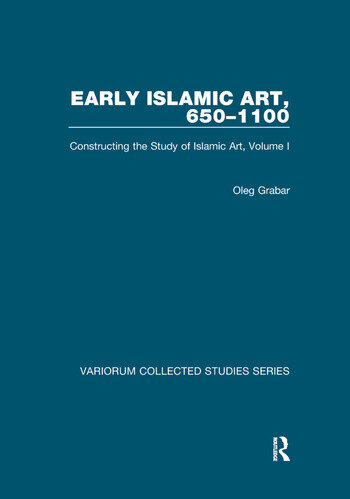 Early Islamic Art, 650-1100 is the first in a set of four volumes of studies by Oleg Grabar. Between them they bring together more than eighty articles, studies and essays, work spanning half a century. Each volume takes a particular section of the topic, the three subsequent volumes being entitled: Islamic Visual Culture, 1100-1800; Islamic Art and Beyond; and Jerusalem. Reflecting the many incidents of a long academic life, they illustrate one scholar's attempt at making order and sense of 1400 years of artistic growth. They deal with architecture, painting, objects, iconography, theories of art, aesthetics and ornament, and they seek to integrate our knowledge of Islamic art with Islamic culture and history as well as with the global concerns of the History of Art. In addition to the articles selected, each volume contains an introduction which describes, often in highly personal ways, the context in which Grabar's scholarship developed and the people who directed and mentored his efforts. The present volume concentrates primarily on documents provided by archaeology understood in its widest sense, and including the study of texts with reference to monuments or to the contexts of these monuments. The articles included represent major contributions to the understanding of the formative centuries of Islamic art, focusing on the Umayyad (661-750) and Fatimid (969-1171) dynasties in Greater Syria and in Egypt, and on the Mediterranean or Iranian antecedents of early Islamic art. Historical, cultural, and religious themes, including the role of court ceremonies, the growth of cities, and the importance of the Qur'an, are introduced to help explain how a new art was formed in the central lands of the Near East and how its language can be retrieved from visual or written sources.

Prize: Best work in the field of Islamic Studies, World prize for the Book of theYear of the Islamic Republic of Iran 'Ashgate has provided a handsome, well-illustrated production at what, for this rarified material, is a remarkably reasonable price.' CAA Reviews 'This volume is packed with nuggets for the curious.' Saudi Aramco World 'Ashgate Variorum has now acknowledged Grabar's signal contribution to the field with a beautifully produced four-volume collection of his shorter publications. Grabar's former students and numerous other fans will welcome the ready access this matched set affords to scores of Grabar's articles... Even readers broadly familliar with Grabar's variegated contributions to the field will find something new here. In its very thougthful thematic arrangement, this collection presents a comprehensive methodological overview that truly lives up to its series title, Constructing the Study of Islamic Art... All in all, this marvelous collection by a truly memorable man belongs in every serious art history collection.' Religion and the Arts