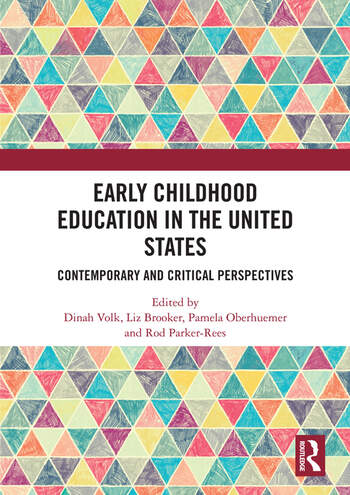 Early Childhood Education in the United States is rife with contradictions, critique and innovation. It is a time when a status quo – characterized by systemic, historic discrimination; teacher de-professionalization; 'teaching to the test'; and attacks on funding – is challenged by new technologies, new literacies and transformative and critical perspectives and practices that defy assumptions and biases to create cutting-edge, diverse instantiations of Early Childhood Education for children, families, and teachers.

This volume, based on a special issue of the Early Years journal written in 2016 before the new administration announced its policies, aims to generate conversations about developments in Early Childhood Education, situated within classist/racist/linguicist and neoliberal contexts, and to analyze critically where we are, where we might go and what we might do. It is also an opportunity to share counter-narratives to the dominant narratives promulgated by many, convinced that narrow, destructive norms of appropriate practice, standards, and accountability, as well as the curtailed achievement of children of Color, those from low income communities, and emergent bilinguals are ‘common sense’.

These counter-narratives – some about transformational projects that have generated innovative perspectives and practices, and some detailing critical analyses and projects that go beyond to explore issues of power – contest education that disprivileges some children and families while advocating education that is child- and family-centered, culturally relevant and sustaining, equitable and democratic. Our hope is that this work creates a 'space of dialogue and human action' needed even more urgently today.

This book was originally published as a special issue of the Early Years journal.

Introduction: Join us in a ‘space of dialogue and human action’ Dinah Volk

4. Who gets to play? Access, popular media and participatory literacies Karen E. Wohlwend

Dinah Volk is Professor Emerita of Early Childhood Education in the College of Education at Cleveland State University, Cleveland, OH, USA. She has taught children in the US and Latin America and has conducted research and published on the languages and literacies of young bilingual children, family engagement, and culturally relevant pedagogies. She is co-editor of Many Pathways to Literacy: Young Children Learning with Siblings, Peers, Grandparents and Communities (with Gregory and Long, 2004) and Navigating Languages, Literacies and Identities: Religion in Young Lives (with Lytra and Gregory, 2016). She is a board member of the Professional Dyads and Culturally Relevant Teaching project, organized by the Early Childhood Education Assembly of the National Council of Teachers of English.

Liz Brooker was an early years teacher before returning to research and teaching at London University Institute of Education, UK in 1996. Her work has frequently examined early transitions in children’s lives, from home to nursery and through the subsequent phases of schooling. She was an editor of Early Years until 2017.

is a Visiting Research Fellow at the State Institute of Early Childhood Research in Munich, Germany. Her main research and publication focus is on ECEC systems in the European context, particularly on cross-national issues relating to the early childhood workforce. She was an editorial board member of Early Years from 1998-2006 and joined the editorial team in 2007.

is a Visiting Research Fellow at the Plymouth Institute of Education, University of Plymouth, UK, where he was formerly Coordinator of Early Childhood Studies. He has been a co-editor of Early Years since 1999. Once upon a time he was a nursery teacher in Bristol, UK.