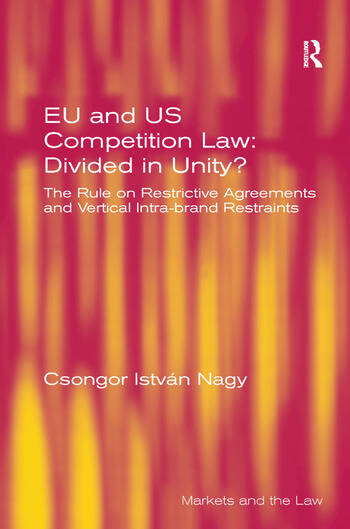 EU and US Competition Law: Divided in Unity?: The Rule on Restrictive Agreements and Vertical Intra-brand Restraints

This book examines the structure of the rule on restrictive agreements in the context of vertical intra-brand price and territorial restraints, analysing, comparing and evaluating their treatment in US antitrust and EU competition law. It examines the concept of 'agreement' as the threshold question of the rule on restrictive agreements, the structure and focus of antitrust/competition law analysis, the treatment of vertical intra-brand price and territorial restrictions and their place in the test of antitrust/competition law. The treatment of vertical intra-brand restraints is one of the most controversial issues of contemporary competition law and policy, and there are substantial differences between the world's two leading regimes in this regard. In the US, resale price fixing merits an effects-analysis, while in the EU it is prohibited almost outright. Likewise, territorial protection is treated laxly in the US, while in the EU absolute territorial protection - due to the single market imperative - is strictly prohibited. Using a novel approach of legal analysis, this book will be of interest to academics and scholars of business and commercial law, international and comparative law.

Csongor IstvÃ¡n Nagy, dr. jur. (EÃ¶tvÃ¶s LorÃ¡nd University, Budapest), LL.M. (Central European University, Budapest/New York), Ph.D. (EÃ¶tvÃ¶s LorÃ¡nd University), S.J.D. (Central European University) is a Hungarian academic and an attorney-at-law admitted to the Budapest Bar. His areas of expertise cover general antitrust, regulated industries, private international law and international economic law. He studied in Budapest, Rotterdam, Heidelberg and New York, and had visiting appointments in the Hague, Munich, Brno, Hamburg and Edinburgh. Csongor is associate professor of law and department head at the University of Szeged (Hungary) and associate professor at the Budapest University of Technology and Economics. He is head of department (International and EU Law) at the IstvÃ¡n BibÃ³ College of Law, and external research fellow at the Competition Law Research Centre in Budapest. Csongor has more than 90 publications in Hungarian, English, German, Romanian and (in translation) Spanish language; he has written five books (three in Hungarian and two in English language). He is the legal editor of the Hungarian yearbook entitled Competition and Regulation.

’The book demonstrates that, as a result of recent changes in US law, not followed in the EU, there is now a significant difference in the treatment of vertical restraints between the two jurisdictions. The author thoroughly documents these differences and discusses how they accord with modern economic analysis.’ George A. Hay, Cornell Law School, USA ’Through a minute and contextual analysis of the application of the relevant rules on vertical restraints in the US and the EU, Csongor Nagy makes a unique contribution to comparative competition law and very competently helps practitioners to avoid the pitfalls of false friends.’ Jules Stuyck, KU Leuven, Belgium and the Central European University, Hungary

EU and US Competition Law: Divided in Unity?: The Rule on Restrictive Agreements and Vertical Intra-brand Restraints