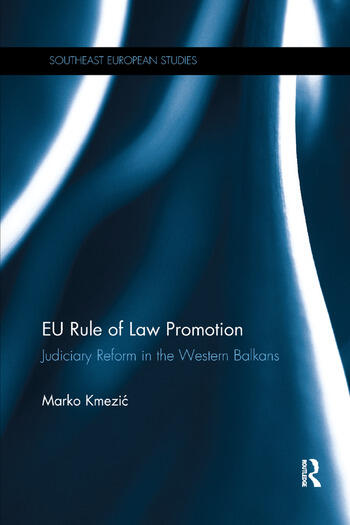 Do EU institutions have an influence on the implementation of the rule of law in potential candidate countries and, if so, of what kind? During the compliance monitoring process related to the effective rule of law and democracy the EU Commission tests and criticizes the effectiveness of the judiciary and strengthens the rule of law in preparation for accession. In the Western Balkans this was a process fraught with difficulties.

Despite the fact that academic scholarship and democratic politics agree on rule of law as a legitimizing principle for the exercise of state authority, there is no uniform European standard for institution-building or monitoring activities by the EU in this area. With focus on the reform of the judiciary in five case study countries of Bosnia and Herzegovina, Kosovo, Macedonia, Montenegro, and Serbia, this empirical research investigates the EU's transformative power with regard to the effectiveness of rule of law and judicial sector reform in its infancy. It analyses the depth and limitations of EU rule of law promotion in the Western Balkans and presents policy recommendations intended to address the shortcomings in judiciary reform.

This book aims to fill the gap in the existing academic scholarship of EU politics, law and Western Balkans literature.

The Innovative and Broader Impact of the Book

2. The Elusive Essence of the Rule of Law

The Problem of Knowledge

Rule of Law in the Process of EU Accession

Rule of Law Conditionality as a Requirement for Judicial Reform

Reconceptualization of the "Spiral Theory"

5. Legacies of the Past as Obstacles to the EU Rule of Law Promotion

Legacies of the Social Legal Culture

Beyond the Autopilot Mode?

7. Judicial Reforms in the Western Balkans

Independence of the Judiciary

Accountability of the Judiciary

Efficiency of the Judiciary

Effectiveness of the Judiciary

9. Scope, Depth and Limits of EU Rule of Law Promotion in the Western Balkans

Does the Rule of Law Promotion in EU Candidate Countries Work?

Marko Kmezic is a Lecturer and Senior Researcher at the Centre for Southeast European Studies, University of Graz, Austria.