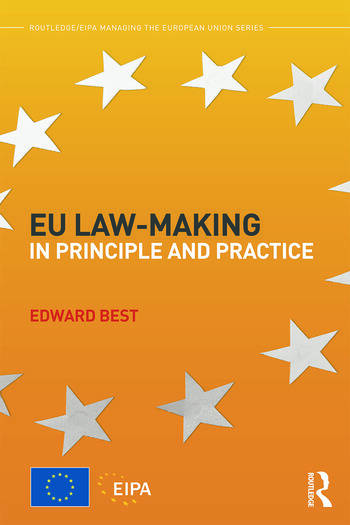 EU Law-making in Principle and Practice

This book is about how European Union (EU) law is made. It is about the ways in which legally binding rules in the form of EU Regulations, Directives and Decisions are produced through interaction between the EU institutions: the independent European Commission; the Council, bringing together the Member States; and the European Parliament, directly elected by EU citizens. It has a particular approach which distinguishes it from the many other books which are published on EU law, institutions, politics and policies. The aim is to make it possible for people not only to see the ‘big picture’ of EU law-making, and to understand the main principles which underlie this system, but also to find a lot of the practical details.

It therefore offers a concise overview of EU law-making which highlights the main principles and structures involved, and it places the different steps in context around a ‘policy cycle’. This cycle is illustrated not only by examples and mini-cases at all stages, but also by a more detailed case study which looks at the EU Timber Regulation around the whole cycle. In addition, the book supplies details about the procedures and practices of law-making which are often sought after by EU policy ‘practitioners’, as well as students of EU decision-making, and which so far have not been easily, if at all, to be found in published literature.

While the book should be of use and interest to all those interested in how the EU works, it is written with a certain emphasis on what it all means for public actors. Almost all public officials in Europe are affected in one way or another by decisions taken in the EU, and an increasing number of officials are directly involved in shaping or implementing these decisions. Yet, as the EU has grown in size, scope and complexity, it has become increasingly difficult for people to have a clear idea of what the EU actually does, and how it really works. It is not always obvious, even to officials who are personally involved, how individual actions in the EU setting fit into the overall policy process. This book aims to answer that question.

Edward Best is Head of Unit at the European Institute of Public Administration (EIPA) in Maastricht, and Senior Fellow of Maastricht University. He holds a D. Phil from the University of Oxford. He worked in the regional security programme of the International Institute for Strategic Studies in London before focusing on comparative regionalism and the management of regional organisations, serving as consultant for various regional bodies as well as the United Nations. Since the early 2000s he has specialised in EU decision-making and the political dimensions of European integration, delivering regular courses on decision-making in the EU institutions, bodies and agencies, and leading work packages in EU research networks on the EU institutions. He has produced numerous publications both on the EU and on regional governance in comparative perspective.

EU Law-making in Principle and Practice