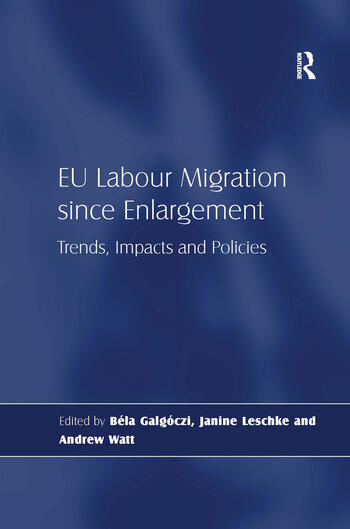 One of the most important consequences of EU enlargement in May 2004 was to extend the principle of the free movement of labour to the citizens of the central and eastern European new member states. In this book a team of labour economists and migration experts sheds light on the dimensions, characteristics and impacts of cross-border labour migration in selected sending (Hungary, Latvia and Poland) and receiving (Austria, Germany, Sweden and the UK) countries. Separate contributions detail the policy responses by governments, employers and trade unions in these countries to the challenges posed by both inward and outward migration. By setting out and analyzing the facts for seven countries, which vary greatly in their geographical situation, policies, and outcomes, the book contributes to the debate on this crucial issue in the ongoing process of European integration.

Béla GalgÃ³cz, European Trade Union Institute, Belgium, Janine Leschke is associate professor at the Department of Business and Politics at Copenhagen Business School, Denmark and Andrew Watt, formerly senior researcher at the European Trade Union Institute in Brussels, since 2012 Andrew Watt has been head of the Macroeconomic Policy Institute (IMK) department of the Hans-BÃ¶ckler Foundation.

Selected as one of the Princeton University Industrial Relations Section's 'Noteworthy Books' in Industrial Relations and Labor Economics for 2009. 'In recent years many citizens of new EU member states entertained hopes that EU enlargement would give them access to better jobs in western Europe. Many in western Europe, on the other hand, initially feared increased competition on their home labour markets in the belief that it would generate higher unemployment and lower wages. This book carefully analyses the major effects and policy responses in both the sending and the receiving countries. The authors, in their conclusions, are able to replace the publicly expressed hopes and fears by a much more nuanced view. The book is essential reading for anyone interested in the issue of labour mobility within an enlarged EU and its effects on sending and receiving societies.' Rainer MÃ¼nz, Senior Fellow, Hamburg Institute of International Economics, Germany 'EU Labour Migration since Enlargement represents the first serious attempt to assess the real impacts of the accession of eight central and eastern European new member states in 2004, followed by two in 2007. As such, it is a welcome antidote to the ad hoc way in which evidence is usually presented in the debate about intra-EU labour migration.' Runnymede Bulletin 'As the first attempt to analyse both developments in European migratory dynamics since the 2004 EU enlargement, and policy responses by various stakeholders in both receiving and sending countries, this book is an insightful read for everyone interested in European labour market, population and integration studies.' Work, Employment and Society