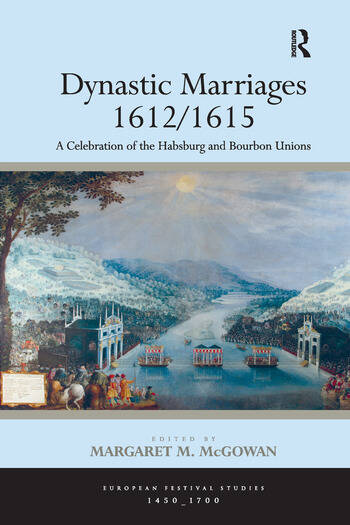 Dynastic Marriages 1612/1615: A Celebration of the Habsburg and Bourbon Unions

The union of the two royal houses - the Habsburgs and the Bourbons - in the early seventeenth century illustrates the extent to which marriage was a tool of government in Renaissance Europe, and festivals a manifestation of power and cultural superiority. With contributions from scholars representing a range of disciplines, this volume provides an all-round view of the sequence of festivals and events surrounding the dynastic marriages which were agreed upon in 1612 but not celebrated until 1615 owing to the constant interruption of festivities by protestant uprisings. The occasion inspired an extraordinary range of records from exchanges of political pamphlets, descriptions of festivities, visual materials, the music of songs and ballets, and the impressions of witnesses and participants. The study of these remarkable sources shows how a team of scholars from diverse disciplines can bring into focus again the creative genius of artists: painters, architects and costume designers, musicians and poets, experts in equestrianism, in pyrotechnics, and in the use of symbolic languages. Their artistic efforts were staged against a background of intense political diplomacy and continuing civil strife; and yet, the determination of Marie de Médicis and her advisers and of the Duke of Lerma brought to a triumphant conclusion negotiations and spectacular commemorations whose legacy was to inform festival art throughout European courts for decades. In addition to printed and manuscript sources, the volume identifies ways of giving future researchers access to festival texts and studies through digitization, making the book both an in-depth analysis of a particular occasion and a blueprint for future engagement with digital festival resources.

Margaret M.McGowan is Research Professor of French at the University of Sussex. Her research interests centre on the intellectual, cultural and artistic concerns of Early Modern Europe. Her publications include L'Art du Ballet de cour en France 1581-1643 (1963), Montaigne's Deceits (1974), Ideal forms in the Age of Ronsard (1985), The Vision of Rome in Late Renaissance France (2000), and Dance in the Renaissance: European Fashion, French Obsession (2008). She gave the Léopold Delisle lectures in 2012, was awarded the Wolfson Prize in 2008, and the CBE for services to French Studies in 1998.

'... a most valuable reference guide for scholars of literature, French studies, art history, history, music, Renaissance studies, theater, and political thought. ... Dynastic Marriages is a rich study that exposes the complexity of early modern festivals and their importance to the ideological fabrication of the state and the ruler.' Sixteenth Century Journal ’This volume examines the Habsburg-Bourbon marriages of 1612/1615 for the first time in depth, drawing both on the wealth of extant documentation of all kinds and on the expertise of a wide range of scholars. Politics, history, equitation, ballet, and music are some of the topics which are discussed in their European context.’ Helen Watanabe-O’Kelly, Exeter College, Oxford University, UK ’This collection of fourteen essays by scholars representing different disciplines illuminates brilliantly and uniquely the multi-faceted significance of dynastic marriages in early seventeenth-century Europe, especially France and Spain.’ Robert Knecht, University of Birmingham, UK 'By bringing together 14 different contributions that analyse the Habsburgs and Bourbons unions from different disciplines, the editor proves that it is essential to discuss dynastic marriages from an interdisciplinary perspective. Only such an approach allows the reader to grasp the diplomatic reasons for the unions, the political and economic consequences of such marriages, along with the popular celebrations that accompanied the events and the theatrical and literary works that followed them.' Reviews in History 'John Elliott provides a masterly summary of the diplomatic and political background to the marriage negotiations. He reminds us that political contemporaries could be as cynical as modern historians about the solid political value of dynastic marriages, but that early modern rulers well understood the value of ’soft power’, and the value of celebrating these dynastic events with all the presentational care, elaboratio

Dynastic Marriages 1612/1615: A Celebration of the Habsburg and Bourbon Unions