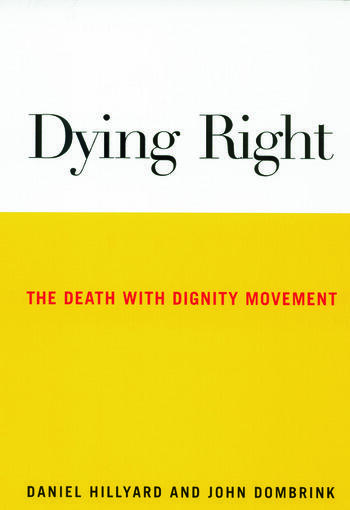 Dying Right provides an overview of the Death With Dignity movement, a history of how and why Oregon legalized physician-assisted suicide, and an analysis of the future of physician-assisted suicide. Engaging the question of how to balance a patient's sense about the right way to die, a physician's role as a healer, and the state's interest in preventing killing, Dying Right captures the ethical, legal, moral, and medical complexities involved in this ongoing debate.

"Dying Right succeeds beautifully in telling the story of the people involved in the death with dignity movements and the events that engulfed them. Events are considered within the broader ethical, religious, and political contexts of the time, and from the viewpoint of current sociological and political theory. Particularly compelling are the authors' analyses of how the two sides attempted to frame the issues to coincide with (differing) prevailing values in the culture (e.g., 'personal autonomy' vs. 'it will be abused') and of each camp's strategies to identify publicly with the moral high ground while painting the opponent as deviant." -- Contemporary Sociology
"The writing is clear and the case that Hillyard and Dombrink assemble is persuasive." -- Virginia Quarterly Review
"Dying Right fills a void in the literature on the 'right to die' movement by providing a trenchant analysis and recounting of the evolution of a popular notion into social reform and legal action. Anyone professionally or personally concerned with the issue of physician-assisted suicide and euthanasia will find this an exceptionally informative work." -- Jonathan D. Moreno, Center for Biomedical Ethics, University of Virginia
"Dying Right is a rich and well-researched account of one aspect of this struggle, the debate over physician-assisted suicide for the terminally-ill...Dying Right offerse insights along the way into such varied concerns as the role of issue framing in politics, the medicalization of American life, the ongoing contest for power between doctors and patients, the politics of deviance, and American rights consciousness." -- The Law and Politics Book Review
"For anyone seeking to understand an increasingly salient aspect of politics, the politics of death, Dying Right is an invaluable source." -- The Law and Politics Book Review
"In their exploration of the history of the assisted suicide movement, Hillyard and Dombrink-both sociologist of law-show the changing contours of the perception of death in the last 40 years in the United States. The book mostly focuses on the ultimately successful campaign in Oregon to get physician assisted suicide legalized. They trace the shift in public opinion while examining the savvy strategizing by the proponents. In addition, they extrapolate from the Oregon case in the United States and abroad to show how there is a growing reaction to and dissatisfaction with the ascendance of the medical establishment at the expense of the individual or patient. The writing is clear and the case that Hillyard and Dombrink assemble is persuasive. At the same time, their pro-death with dignity stance is apparent and hardly interrogated." -- The Virginia Quarterly Review, Winter 2002
"This carefully developed study taje us into the whole discussion of death and the death with dignity movement. It was informative, explored issued, documented history, and stayed clear of the politics of it all. It gives good information and concludes with the discussion of how we are to change the moral boundaries to effect the good death...extensive resource information included." -- The World Pastoral Center, Resources Hotline