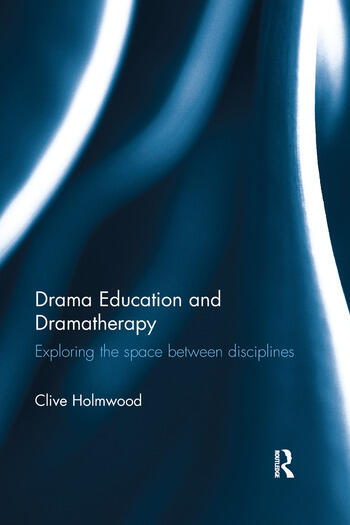 Drama Education and Dramatherapy: Exploring the space between disciplines

Dramatherapy is increasingly being used in schools and educational establishments as a way of supporting young people’s emotional needs. This book examines the space between drama education and Dramatherapy exploring the questions: Does a therapist teach? When does the role of the drama teacher border on that of therapist? How do these two professions see and understand each other and the roles they play?

In Drama Education and Dramatherapy, Clive Holmwood draws on his experience as a Dramatherapist and examines the history of drama education and Dramatherapy, exploring the social, political, therapeutic and artistic influences that have impacted these two professions over the last century. He also discusses how these fields are intrinsically linked and examines the liminal qualities betwixt and between them. The book considers two specific case studies, from the therapist's and teacher's perspectives discussing what happens in the drama class and therapy space including how the dramatic form is understood, explored and expressed both educationally and therapeutically. The ‘them and us’ mentality, which often exists in two different professions that share a common origin is also explored. The book contemplates how teachers and Dramatherapists can work collaboratively in the future, bringing down barriers that exist between them and beginning a working dialogue that will ultimately and holistically support the children and young people they all work with.

This book will be of interest to those involved in using drama in an educational or therapeutic context, including: drama teachers, arts therapists, teachers of arts therapy and researchers within wider arts, applied arts and educational faculties within colleges and universities.

Chapter 7: Context in Drama Education and Drama Therapy - Space in Context or Context in Space

Chapter 9: The Drama in Therapy and Education

Clive Holmwood is a senior lecturer in therapeutic arts at the University of Derby and is Director of Creative Solutions Therapy Ltd, UK. He gained his PhD in Drama Education and Dramatherapy from the University of Warwick, UK, and is an experienced HCPC registered Dramatherapist who has worked for almost 20 years with children and adults in the public, private and voluntary sectors. He is also co-editor of 'The International Handbook of Dramatherapy published by Routledge in 2016.

Drama Education and Dramatherapy: Exploring the space between disciplines