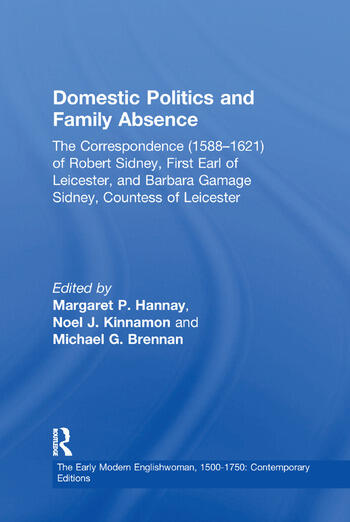 Though all but three of Robert Sidney's 332 extant letters to his wife Barbara Gamage Sidney have been in the Sidney family archive, they have never previously been fully transcribed or edited. This edition of the surviving letters, which Sidney wrote to his wife when they were separated for long periods by his official duties at various continental locations, provides a wealth of information about the Sidneys' family life. They touch on matters such as family illnesses, the children's education, court gossip, finances, and the construction of additions to Penshurst Place, the seat of the Sidney family. The letters also offer an extraordinary record of an early-modern English household in which the wife was entrusted with the overall responsibility for the well-being of her family, and for managing a large estate in the absence of her husband. Sidney's letters show that, although his union with the wealthy Welsh heiress Barbara Gamage may have been engineered primarily for political and financial ends, clearly the couple enjoyed a happy and loving marriage. Their correspondence is full of endearments, and Robert frequently tells his wife how much he misses her and their beloved children, including his 'Malkin,' later Lady Mary Wroth. The volume includes an introduction and notes by the editors. It also includes contextual materials such as relevant sections on family matters from letters to Robert from his trusted agent, Rowland Whyte; and from Robert Sidney's own business correspondence. The introduction specifically addresses the issue of Barbara's literacy, within the broader context of late-Elizabethan women's literacy.

Margaret P. Hannay, Noel J. Kinnamon and Michael G. Brennan have together edited The Collected Works of Mary Sidney Herbert, Countess of Pembroke for the Oxford English Texts Series (Oxford UP, 1998) and a modern-spelling edition for students and general readers, Selected Works of Mary Sidney Herbert, Countess of Pembroke (MRTS, forthcoming). They are currently editing The Correspondence of Rowland Whyte and Robert Sidney, first Earl of Leicester. Margaret Hannay, Professor of English at Siena College, is the author of Philip's Phoenix: Mary Sidney, Countess of Pembroke (Oxford UP, 1990), editor of Silent but for the Word: Tudor Women as Patrons, Translators, and Writers of Religious Works (Kent State UP, 1985), and editor, with Susanne Woods, of Teaching Tudor and Stuart Women Writers (MLA, 2000). Michael G. Brennan is Professor of Renaissance Studies at the University of Leeds, is the author of Literary Patronage in the English Renaissance: The Pembroke Family (Routledge, 1988) and has edited Lady Mary Wroth's Love's Victor: The Penshurst Manuscript (Roxburghe Club, 1988). With Noel Kinnamon he has published A Sidney Chronology: 1554-1654 (Palgrave Macmillan, 2003) and has has published extensively on Renaissance travel writings.

Prize: Honorable Mention for the Josephine Roberts Edition Prize, awarded by the Society for the Study of Early Modern Women in 2006 ’... this authoritative text provides a fascinating and detailed biographical introduction to the lives of the correspondents and the historical context of Robert Sidney's letters... This meticulously edited collection will also no doubt bring him renewed attention.’ The Year's Work in English Studies