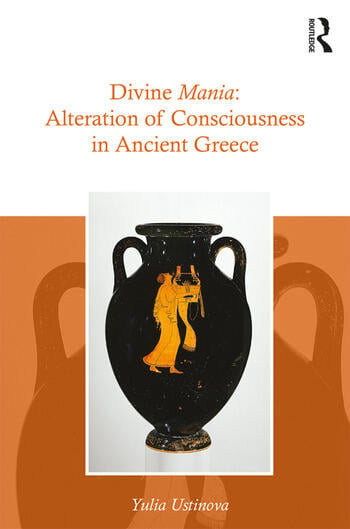 ‘Our greatest blessings come to us by way of mania, provided it is given us by divine gift,’ – says Socrates in Plato’s Phaedrus. Certain forms of alteration of consciousness, considered to be inspired by supernatural forces, were actively sought in ancient Greece. Divine mania comprises a fascinating array of diverse experiences: numerous initiates underwent some kind of alteration of consciousness during mystery rites; sacred officials and inquirers attained revelations in major oracular centres; possession states were actively sought; finally, some thinkers, such as Pythagoras and Socrates, probably practiced manipulation of consciousness. These experiences, which could be voluntary or involuntary, intense or mild, were interpreted as an invasive divine power within one’s mind, or illumination granted by a super-human being.

Greece was unique in its attitude to alteration of consciousness. From the perspective of individual and public freedom, the prominent position of the divine mania in Greek society reflects its acceptance of the inborn human proclivity to experience alteration of consciousness, interpreted in positive terms as god-sent. These mental states were treated with cautious respect, and in contrast to the majority of complex societies, ancient and modern, were never suppressed or pushed to the cultural and social periphery.

as mental disorder: definition and characteristics

Madness in context: the importance of historicism

Alterations of consciousness between unity and diversity: aspects of methodology and terminology

The scope of this book and its sources

Inspired prophets as instruments of the gods

Inspired prophecy in Greece as compared to other cultures

Prophecy in Mesopotamia in comparison to Greece

Prophecy in ancient Israel in comparison to Greece

The nature of initiate’s experience I: mania for mania’s sake or for its treatment

The nature of the initiate’s experience II: paradosis and epopteia

The core experience in the ‘great mysteries,’ mania and alteration of consciousness

Dionysus and individual madmen in myths

and bakchoi in myth, poetry and art

The historicity of the savage rites

The dynamics of the thiasos

Bakcheia from a comparative viewpoint

Aspects of physiology and psychology of bakcheia

Mania on the battlefield and on the march

Possession by the nymphs

The Muses, memory, and inspiration

Music and alteration of consciousness

The nature of poetic inspiration: Plato

The nature of poetic inspiration: Aristotle

Modern poets and musicians, and their inspiration

Greeks on erôs as mania

The philosopher’s mania and his path to truth

Epilogue. Perspectives on the divine mania

Yulia Ustinova is Associate Professor at the Department of General History, Ben-Gurion University of the Negev, Israel. Her research focuses on ancient Greek religion and its role within the society. In addition to the study of textual and archaeological sources, her approach is based on the application of results of cognitive neuroscience, anthropology, and sociology to the interpretation of historical phenomena.