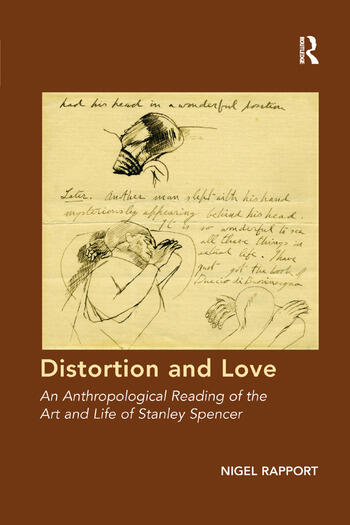 Distortion and Love: An Anthropological Reading of the Art and Life of Stanley Spencer

In this ground-breaking book, a theory of ’distortion’ - of the way in which the processes of human life are subject to interference, diversion and transformation - is developed by way of the art of one of Britain’s greatest twentieth-century painters and that art’s public reception. Devoted to his native village of Cookham-on-Thames, Stanley Spencer painted not only landscapes and portraits with loving detail but also the ’memory-feelings’ which he felt were a ’sacred’ part of his consciousness. Yet Spencer was also a controversial public figure, with some taking the view that his visionary paintings were ugly distortions of human life, even marks of an immoral nature. Examining how Spencer lived his vision, how he painted it and wrote it, and also how his attempts to communicate that vision were received by his contemporaries and have continued to be interpreted since his death, the author posits distortion as key: an intrinsic aspect both of human creation and of human interaction. What we intend to make, to say, to do and have done, often mutates in the process of being expressed or put into effect: we live amid distortion. Love - the affective appreciation of one another - is then a means by which we accommodate distortion and its consequences in our lives. An illustration, through Stanley Spencer’s story, of significant aspects of a human condition, this book will appeal across disciplines, including to art historians and students of Spencer’s work, as well as to scholars of anthropology with interests in creativity, perception and interpretation.

Nigel Rapport is Professor of Anthropological and Philosophical Studies and Head of the School of Philosophy, Anthropology, Film and Music at the University of St Andrews, UK. He has been elected a Fellow of the Royal Society of Edinburgh, and been awarded the Rivers Memorial Medal by the Royal Anthropological Institute. Among his recent books are: Reflections on Imagination; Social and Cultural Anthropology: The Key Concepts; and Anyone: The Cosmopolitan Subject of Anthropology.

'This remarkable work may well be the crowning achievement in Nigel Rapport’s already distinguished anthropological and literary oeuvre. Not only does Rapport succeed brilliantly in doing justice to Stanley Spencer’s eccentric life and his religious and distorted ways of seeing; he offers a stunning critique of an anthropology of art that has all too often privileged sociological reductions over in-depth explorations of the quiddity of things, the contingency of events, and the irreducibility of the individual.' Michael Jackson, Harvard Divinity School, USA

Distortion and Love: An Anthropological Reading of the Art and Life of Stanley Spencer