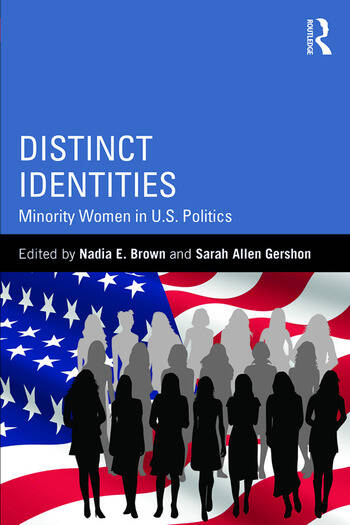 Minority women in the United States draw from their unique personal experiences, born of their identities, to impact American politics. Whether as political elites or as average citizens, minority women demonstrate that they have a unique voice that more often than not centers on their visions of justice, equality, and fairness.

In this volume, Dr. Nadia E. Brown and Sarah Allen Gershon seek to present studies of minority women that highlight how they are similar and dissimilar to other groups of women or minorities, as well as variations within groups of minority women. Current demographic and political trends suggest that minority populations-specifically minority women-will be at the forefront of shaping U.S. politics. Yet, scholars still have very little understanding of how these populations will behave politically. This book provides a detailed view of how minority women will utilize their sheer numbers, collective voting behavior, policy preferences, and roles as elected officials to impact American politics.

The scholarship on intersectionality in this volume seeks to push beyond disciplinary constraints to think more holistically about the politics of identity.

1. Introduction Nadia E. Brown and Sarah Allen Gershon  Part I: Gender, Race, Ethnicity and Mass Behavior 2. The Differential Effect of Resources on Political Participation Across Gender and Racial Groups Mirya Holman  3. Linked Fate at the Intersection of Race, Gender and Ethnicity K. Jurée Capers and Candis Watts Smith  4. African American Women: Leading Ladies of Liberal Politics Pearl K.Ford Dowe  5. In Considering the Political Behavior of Asian American Women Jeanette Yih Harvie  6. Hawks and Doves? An Analysis of Latina and Latino attitudes toward military intervention in Iraq Rachel VanSickle-Ward and Adrian D. Pantoja  Part II: Race, Gender and Campaigning for Office  7. How Do You See Me?: Stereotyping of Black Women and How It Affects Them in an Electoral Context Jessica D. Johnson Carew  8. A Tulsi by Any Other Name: An Analysis of South Asian American Support for a Hindu Congressional Candidate Shyam K. Sriram  9. Latina Issues: An Analysis of the Policy Issue Competencies of Latina Candidates Ivy A.M. Cargile  10. Media Framing of Black Women’s Campaigns for the US House of Representatives Orlanda Ward  Part III: Race, Gender and Office Holding 11. Officeholding in the Fifty States: The Pathways Women of Color Take to Statewide Elective Executive Office Kira Sanbonmatsu  12. New Expectations for Latina State Legislative Representation Christina E. Bejarano  13. The Unique Career Path of Latina Legislators, 1990-2010 Ricardo Ramirez and Carmen Burlingame  14. Asian Pacific Americans in U.S. Politics: Gender and Pathways to Elected Office Nicole Filler and Pei-te Lien  15. Race, Perceptions of Femininity and the Power of the First Lady: A Comparative Analysis Andra Gillespie  16. To Be Young, Gifted, Black, and a Woman: A comparison of the Presidential Candidacies of Charlene Mitchell and Shirley Chisholm Christina Greer  17. Raising their Voices in Tribal Politics: Indigenous Women Leaders in Arizona and New Mexico" Diane M. Prindeville and Lawrence Broxton  18. Why are You under the Skirts of Women?:" Race, Gender and Abortion Policy in the Georgia State Legislature Tonya M. Williams  Part IV: Conclusions  19. Afterward Nadia E. Brown and Sarah Allen Gershon

Nadia Brown is Associate Professor in the Department of Political Science & African American Studies and Research Center at Purdue University. Her research demonstrates the importance of marginalized identities in political representation and participation.

is an Associate Professor of Political Science at Georgia State University.  Her research focuses on the incorporation of traditionally underrepresented groups (including women, and racial and ethnic minorities) into the American political system.

'Drawing on a wide range of perspectives and methods of analysis, the contributors in this book offer a nuanced look into the myriad ways minority women influence, and are influenced by, the political world. This is a necessary addition to our examination of institutions, voters, and elections, as it requires us to consider the power of identity and the growing influence of women of color.' - Kathleen Dolan, University of Wisconsin Milwaukee, USA

'Pulling together original and thoughtful contributions from leading experts in the field on the role of women of color in politics and using a mix of methodological and theoretical approaches, the contributors to this edited volume delve deeply into the reality of the political experiences of Black, Latina, Asian American, and Native American women. The book is essential reading for those interested in truly understanding modern U.S. politics and the role played by women of color as candidates and in the general public.' - Melissa Michelson, Menlo College, USA