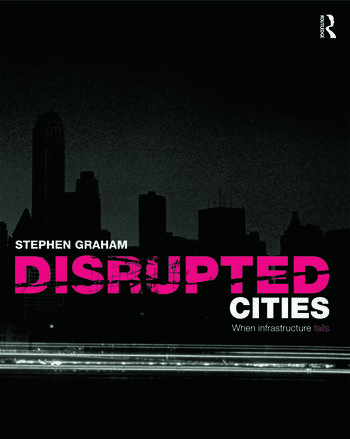 Bringing together leading researchers from geography, political science, sociology, public policy and technology studies, Disrupted Cities exposes the politics of well-known disruptions such as devastation of New Orleans in 2005, the global SARS outbreak in 2002-3, and the great power collapse in the North Eastern US in 2003. But the book also excavates the politics of more hidden disruptions: the clogging of city sewers with fat; the day-to-day infrastructural collapses which dominate urban life in much of the global south; the deliberate devastation of urban infrastructure by state militaries; and the ways in which alleged threats of infrastructural disruption have been used to radically reorganize cities as part of the ‘war on terror’.

Accessible, topical and state-of-the art, Disrupted Cities will be required reading for anyone interested in the intersections of technology, security and urban life as we plunge headlong into this quintessentially urban century. The book’s blend of cutting-edge theory with visceral events means that it will be particularly useful for illuminating urban courses within geography, sociology, planning, anthropology, political science, public policy, architecture and technology studies.

Stephen Graham is Professor of Human Geography at Durham University in the UK. He has a background in urbanism, planning and the sociology of technology. His research addresses the complex intersections between urban places, mobilities, technology, war, surveillance and geopolitics. He is Academic Director of the International Boundaries Research Unit (IBRU) and Associate Director of the Centre for the Study of Cities and Regions (CSCR), both at Durham. His books include Telecommunications and the City, Splintering Urbanism (both with Simon Marvin), the Cybercities Reader, and Cities, War and Terrorism. His latest book, Cities Under Siege: The New Military Urbanism, will be published by Verso in Summer 2009.

"In this provocative, compelling book, Graham and an international team of collaborators add essential theoretical insights and empirical knowledge to the rapidly developing field of infrastructure studies. This is essential reading for anyone interested in the urbanized dimensions of infrastructure and in the infrastructural dimensions of urbanization."—Neil Brenner, Sociology and Metropolitan Studies, New York University

"With a razor-sharp blade, this remarkable book cuts through the tangled skein of infrastructure that knots the city – and the planet – together. By looking at these networks in failure mode, Stephen Graham and his collaborators demonstrate with scary precision the ways in which such "invisible" webs not simply service but regulate - and too often destroy - the lives that depend on them."—Michael Sorkin, Architecture and Urban Design, City College of New York

"Seeing cities through the lens of infrastructure opens up a world of processes, breakdowns, and inertias. Each of the chapters brings to light unexpected features of how infrastructures fit into city life, how malfunction makes them more visible in certain cities and a state of nature in slums, how political dynamics are unleashed by infrastructures . This is an exciting contribution to the study of cities." –Saskia Sassen, author of Deciphering the Global