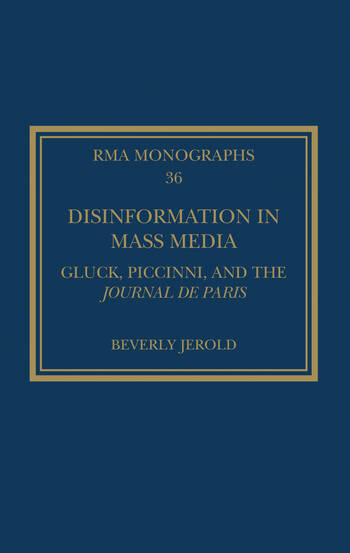 The founding in 1777 of the Journal de Paris, France’s first daily and distinctly commercial paper, represents an early use of disinformation as a tool for political gain, profit, and societal division. To attract a large readership and bar competition for C. W. Gluck’s works at the Paris Opéra, it launched a prolonged campaign of anonymous lies, mockery and defamation against two prominent members of the Académie Française who wished the Opéra to be open to all deserving composers, but lacked a comparable daily forum with which to defend themselves. In this unique episode, music served as a smokescreen for nefarious activity. No musical knowledge is necessary to follow this purely political drama, in which the tactics employed bear a remarkable resemblance to current events.

1: The Cast and Setting

The 1781 Reprint of Gluckist Texts

Journalism at the New Paper

The Activities of Gluck’s Associate

3: The Journal de Paris on the Offensive

A Snare for La Harpe

Informed Commentaries on the Essai

4: Libel of La Harpe by Allusion

The Risk of Serious Criticism

A Vindictive Matter from the Past

The JPL Review of Armide

The JP’s Campaign of Disinformation

The Club of Hercules

Beverly Jerold Scheibert is a writer and keyboard performer based in New Jersey, USA.