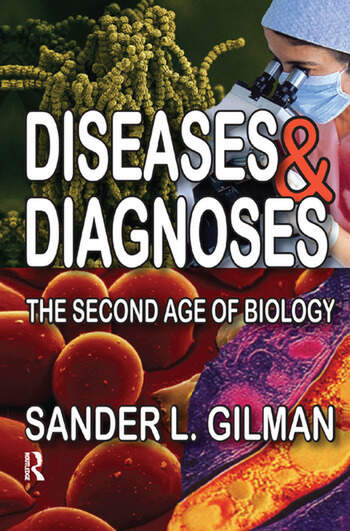 Diseases and Diagnoses: The Second Age of Biology

Diseases and Diagnoses discusses why such social problems as addiction, sexually transmitted diseases, racial predisposition for illness, surgery and beauty, and electrotherapy, all of which concerned thinkers a hundred years ago, are reappearing at a staggering rate and in diverse national contexts. In the twentieth century such problems were viewed as only historical concerns. Yet in the twenty-first century, we once again find ourselves confronting their implications.

In this fascinating volume, Gilman looks at historical and contemporary debates about the stigma associated with biologically transmitted diseases. He shows that there is no indisputable way to measure when a disease or therapy will reappear, or how it may be perceived at any given moment in time. Consequently, Gilman focuses on the socio-cultural and political implications that the reappearance of such diseases has had on contemporary society. His approach is to show how culture (embedded in cultural objects) both feeds and is fed by the claims of medical science-as for example, the reappearance of "race" as a cultural as well as a medical category.

If the twentieth century was the "age of physics," in the latter part of the past century and certainly in the twenty-first century biological concerns are recapturing central stage. Achievements of the biological sciences are changing the public's sense of what constitutes cutting-edge science and medicine. None has captured the public imagination more effectively than the mapping of the human genome and the promise of genetic manipulation, which fuel what Gilman calls a "second age of biology." Although not without controversy, the role of genetics appears to be key. Gilman puts contemporary debates in historical context, showing how they feed social and cultural concerns as well as medical possibilities.

Introduction: On "Race," Sex, and Beauty in Historical Perspective
1. Race (Again) and Medicine (Again): The Jews and Alcoholism
2. What is the Color of the Gonorrhea Ribbon? Stigma, Sexual Diseases, and Popular Culture inthe Twenty-First Century
3. Nietzsche, Bizet, and Wagner Illness, Health, and Race in the Nineteenth Century
4. Are You Just What You Eat? Ritual Slaughter and the Politics of National Identity
5. Imagining Glamour in the Age of Aesthetic Surgery
6. Sigmund Freud, Electrotherapy, and the Voice
7. Psychoanalysis, Medicine, and the Body in the Time of Freud and Brill
8. The Practical Aspect of Culture in Illness Bilingualismin the World of Health and Illness
Index

Diseases and Diagnoses: The Second Age of Biology