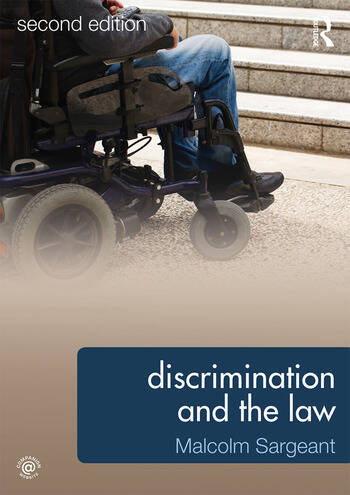 Discrimination and the Law 2e

The book begins with an examination of what is meant by such concepts as equality and discrimination followed by an analysis of the Equality Act 2010 and the impact of EU and international law. All the protected characteristics contained in the Equality Act 2010 are critically considered (age, disability, gender reassignment, marriage and civil partnership, pregnancy and maternity, race, religion or belief, sex, sexual orientation). Issues not covered by the legislation such as those relating to multiple discrimination and caste discrimination are also analysed.

Important cases from the UK courts as well as international courts are considered. The book also contains an appendix with the most relevant parts of the 2010 Act. Important cases are highlighted in the text and some reflections as the basis for further discussion are included at the end of each chapter.

This is an essential introduction to the wide-ranging law relating to discrimination in the UK for law, HRM and business students.

1.6 The grounds for discrimination 9

3.7 Liability of employers and employees 42

3.8 Relationships that have come to an end 42

6.4 Protection in the United Kingdom 81

6.7 Protection from detriment and dismissal 84

8.8 The European Convention on Human Rights 113

11 Discrimination in the workplace

11.4 How to prevent discrimination in the workplace 154

Malcolm Sargeant is Professor of Labour Law at Middlesex University and teaches discrimination law at both undergraduate and postgraduate levels. He is an academic fellow of the CIPD and co-author of several student text books on employment law as well as being the author and editor of other books on aspects of discrimination and employment law.

Discrimination and the Law 2e