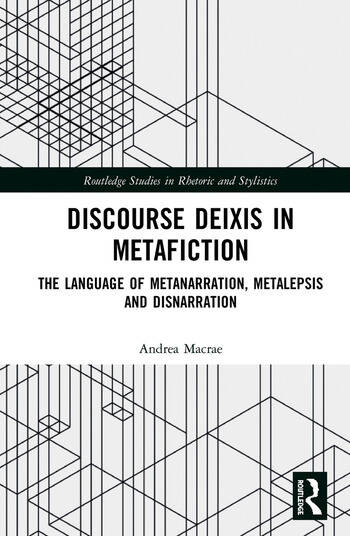 Discourse Deixis in Metafiction: The Language of Metanarration, Metalepsis and Disnarration

This volume advances scholarly understanding of the ways in which discourse deixis underpins the workings of metafictional novels. Building on existing scholarship in the field, the book begins by mapping out key themes and techniques in metafiction and puts forward a focused and theoretically coherent account of discourse deixis—language which points to a section or aspect of the discourse context in which that language is used—in written literary discourse, highlighting its inherent significance in metafiction specifically. Macrae takes readers through an exploration of discourse deixis as used within the techniques of metanarration, metalepsis, and disnarration, drawing on a mix of both well-established and lesser-known metafictional novels from the late 1960s and early 1970s by such authors as John Barth, Brigid Brophy, Robert Coover, John Fowles, Steve Katz, and B.S. Johnson. This comprehensive account integrates and develops a new approach to understanding discourse deixis and innovative insights into metafictionality more broadly and will be of particular interest to scholars in literary studies, postmodern literature, narratology, and stylistics.

Andrea Macrae is a Senior Lecturer in Stylistics at Oxford Brookes University, UK. She is the co-editor of Pronouns in Literature: Positions and Perspectives in Language. She has published on deixis in several journals and edited collections.

Discourse Deixis in Metafiction: The Language of Metanarration, Metalepsis and Disnarration