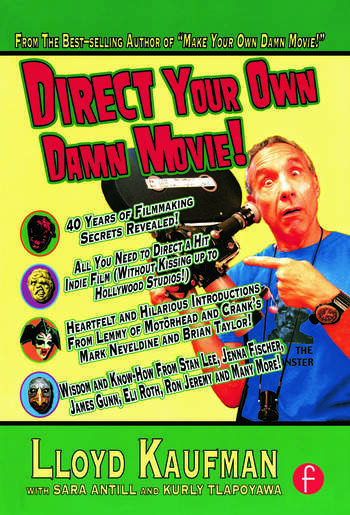 Direct Your Own Damn Movie!

The Independent Directing Bible that will fit in your back pocket!
(If you have an extremely large pocket...)

Have you always wanted to direct a movie, but don't know how to start?

Want to know how to get your first directing job?

What do directors even do, anyway?

Legendary director Lloyd Kaufman, creator of The Toxic Avenger, reveals 40 years worth of maverick cinematic know-how! Direct Your Own Damn Movie! will be your step-by-step roadmap on the journey through:
* Scriptwriting
* Pre-production
* Casting
* Managing your set
* Post-production
* Distribution

Master the art of directing the easy way! There is no better way to become a director than by following the instruction and wisdom of an actual successful film director, not someone who just talks about it.

WARNING!
Do not read this book if you suffer from motion sickness, or are about to operate heavy machinery. This book is not for the faint of heart, the good of taste, or those who might be pregnant.

CHAPTER 1 - JOINING THE ARMY OF ONE

CHAPTER 3 - SHOW, DON'T TELL, AND OTHER THINGS MY UNCLE LANCE WHISPERED TO ME IN THE BASEMENT

CHAPTER 4- PREPRODUCTION: MY OWN PRIVATE IDAHO (AND BY IDAHO, I, OF COURSE, MEAN HELL)

CHAPTER 6-PREPARATION AND SCHEDULING: WHO KNEW THERE WAS SO MUCH PAPER INVOLVED IN THE ART OF DIRECTING?

CHAPTER 7 - MANAGING THE SET, OR MASTERING THE AGE-OLD ART OF BABYSITTING.

CHAPTER 8 - PUTTING THE "SPECIAL" IN SPECIAL EFFECTS, OR WHY WE SPEND 80% OF OUR BUDGET ON BROMO-SELTZER

CHAPTER 9 - POST PRODUCTION, OR TAKING A CUE FROM DEDICATED HOOKERS AND FINISHING YOUR MOVIE OFF RIGHT

CHAPTER 10 - IF YOU WANT IT DONE RIGHT, YOU'VE GOT TO DO IT YOURSELF, OR PAY SOMEONE A LOT OF MONEY

CHAPTER 11 - A CHAPTER JUST ABOUT DIRECTING

Lloyd Kaufman is one of the very few genuine auteur filmmakers. He has written, produced, and/or directed more than 25 films, including "The Toxic Avenger", "Terror Firmer", "Tromeo and Juliet", and "Poultrygeist: Night of the Chicken Dead". Kaufman is president of the world-famous Troma Entertainment, the oldest and, arguably, the longest-running truly independent film studio in history. He is also the president of the IFTA (Independent Film & Television Alliance), whose members produce more than 400 independent films and countless hours of television programming each year and generate more than $4 billion in distribution revenues annually.

"It's funny, it's profane, and you may learn a thing or two." - Internet Video Magazine

Direct Your Own Damn Movie!