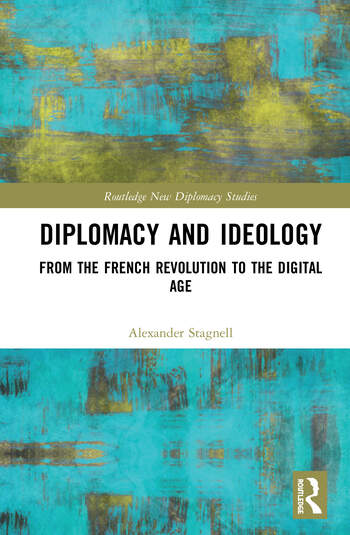 Diplomacy and Ideology: From the French Revolution to the Digital Age

This innovative new book argues that diplomacy, which emerged out of the French Revolution, has become one of the central ideological state apparatuses of the modern democratic nation-state.

The book is divided into four thematic parts. The first presents the central concepts and theoretical perspectives derived from the work of Slavoj Žižek, focusing on his understanding of politics, ideology, and the core of the conceptual apparatus of Lacanian psychoanalysis. There then follow three parts treating diplomacy as archi-politics, ultra-politics, and post-politics, respectively highlighting three eras of the modern history of diplomacy from the French Revolution until today. The first part takes on the question of the creation of the term ‘diplomacy’, which took place during the time of the French Revolution. The second part begins with the effects on diplomacy arising from the horrors of the two World Wars. Finally, the third part covers another major shift in Western diplomacy during the last century, the fall of the Soviet Union, and how this transformation shows itself in the field of Diplomacy Studies. The book argues that diplomacy’s primary task is not to be understood as negotiating peace between warring parties, but rather to reproduce the myth of the state’s unity by repressing its fundamental inconsistencies.

This book will be of much interest to students of diplomacy studies, political theory, philosophy, and International Relations.

Introduction: On the Problems of Diplomacy

2. Diplomacy as an Ideological State Apparatus

3. The Naming of Diplomacy

4. The Beginnings of Diplomacy

5. Diplomacy and the People

7. Diplomacy and the Nuclear Threat

8. Diplomacy for the Next Century

9. Diplomacy and Terrorism in the Digital Age

Alexander Stagnell is a Senior Lecturer at Södertörn University, Sweden.

Diplomacy and Ideology: From the French Revolution to the Digital Age