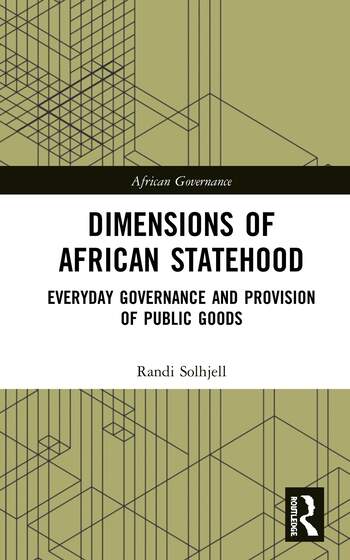 This book argues that the way in which we use the concept of "state" in many African countries must involve a deeper engagement of the complex workings of state–society relations, rather than a master narrative of European state formation.

explores the concept of "statehood" as a set of daily practices that govern and generate effects through the voices of those performing and living the state. The book is based on extensive, firsthand research on the delivery of and access to public goods as expressions of statehood in eastern Democratic Republic of Congo. A public good, a field long dominated by economic models, can be seen as a power relation rather than a universal, positive good. By unpacking the meaning of "whose public," the book offers an avenue for a dynamic and multilayered understanding of practices that express and shape statehood. The assessment of statehood as presented in this book is an invitation to contribute to the new era of what statehood entails in regions different from the Global North.

This book will be of interest to scholars and students of politics, African studies, and governance.

4. Managing Waste: "The Political class does not take care of garbage here"

5. "We need to live but the leaders are killing us": Water and Hydroelectricity

6. State Persistence: Perspectives from the Roads

7. Governance, Citizenship and the Dimensions of Statehood

Randi Solhjell is affiliated with the Norwegian Police University College and the Centre for Research on Extremism at the University of Oslo. She was a former senior research fellow associated at the Norwegian Institute of International Affairs and holds a PhD from the London School of Economics.