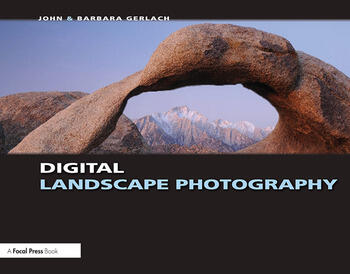 Photographing landscape with a film camera is different than with a digital camera. There are several books on the market that cover landscape photography but few of them are specifically for the digital photographer. This book is what you are looking for!

Digital Landscape Photography covers:
* equipment such as accessories and lenses
* exposure from shutter speed and other common mistakes
* shooting
* light and its importance
* composing your perfect photo
* printing
* and a special section on specific subjects such as waterfalls and sunrises

Digital Landscape Photography, written by experts that have been shooting outdoors for decades, is a fresh look at current ways to shoot landscapes by making the most of digital format.

John Gerlach earned a B.S. Degree in Wildlife Ecology from Central Michigan University in 1977. He has earned his living as a professional nature photographer since 1980. He is a versatile photographer who is equally at home making landscape images of Death Valley, photographing hummingbirds with high speed flash, or making moody images of dewy dragonflies and butterflies. Rather than photographing subjects that might sell well in the marketplace, he prefers to pursue subjects that interest him the most. He often photographs subjects that are not well known such as the Black Rosy-Finch which appeared on the front cover of the October 2000 issue of BIRDING. His photographs have been published in every major national magazine that uses nature photographs including NATIONAL WILDLIFE, SIERRA, NATURAL HISTORY, PETERSEN'S PHOTOGRAPHIC, RANGER RICK, BIRDER'S WORLD, MICHIGAN NATURAL RESOURCES, and AUDUBON. OUTDOOR PHOTOGRAPHER and POPULAR PHOTOGRAPHY have published his instructional articles about nature photography on several occasions. His nature photos are showcased in calendars produced by Hallmark, Kodak, Sierra Club, Argus, Browntrout, Abbeville Press, and many others. His photos can be found in books published by the National Geographic Society, Reader's Digest, Time-Life, Smithsonian, Eastman Kodak, Abbeville Press, Stewart Tabori & Chang, Northword Press as well as hundreds of scientific textbooks in use in colleges and universities throughout the world. John is the associate editor of NATURE PHOTOGRAPHER. His column, "Field Notes" is found in each issue and reveals enlightening tips on shooting nature images in the field. Barbara Gerlach is a skilled nature photographer with a highly artistic approach. Since Barbara grew up on a farm, she's always had a keen interest in nature. She became interested in nature photography while working as a color printer for NASA. She met John in the mid-eighties and with his guidance, quickly developed her hobby in