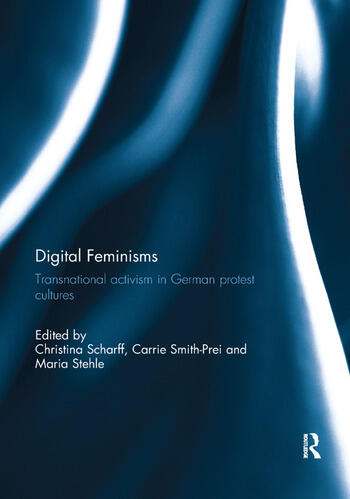 The relative rise or decline of feminist movements across the globe has been debated by feminist scholars and activists for a long time. In recent years, however, these debates have gained renewed momentum. Rapid technological change and increased use of digital media have raised questions about how digital technologies change, influence, and shape feminist politics. This book interrogates the digital interface of transnational protest movements and local activism in feminist politics. Examining how global feminist politics is articulated at the nexus of the transnational/national, we take contemporary German protest culture as a case study for the manner in which transnational feminist activism intersects with the national configuration of feminist political work. The book explores how movements and actions from outside Germany’s borders circulate digitally and resonate differently in new local contexts, and further, how these border-crossings transform grass-roots activism as it goes digital. This book was originally published as a special issue of Feminist Media Studies.

3. From #aufschrei to hatr.org: digital-material entanglements in the context of German digital feminist activisms Helga Sadowski

4. How (not) to "Hollaback": towards a transnational debate on the "Red Zora" and militant tactics in the feminist struggle against gender-based violence Katharina Karcher

Christina Scharff is Senior Lecturer in Culture, Media and Creative Industries at King’s College London, UK. She has a research interest in gender, media, and culture, and is the author of Repudiating Feminism: Young women in a neoliberal world (2012) and New Femininities: Postfeminism, Neoliberalism and Subjectivity (with Rosalind Gill, 2011). Her second monograph, Music, Gender and Entrepreneurialism is forthcoming with Routledge.

is Associate Professor of German Studies at the University of Alberta, Canada. She has research interests in digital feminisms, performance art activism, affective publics, and the body. She is the author of Revolting Families: Toxic Intimacy, Private Politics, and Literary Realism in the German Sixties (2013), and Awkward Politics: Technologies of Popfeminist Activism (with Maria Stehle, 2016).

is Associate Professor of German and core faculty in Cinema Studies and Women, Gender, and Sexuality Studies at the University of Tennessee – Knoxville, USA. She has published multiple articles and book chapters in the fields of German, gender, and media studies and is the author of Ghetto Voices in Contemporary German Culture (2012) and of Awkward Politics: Technologies of Popfeminist Activism (with Carrie Smith-Prei, 2016).