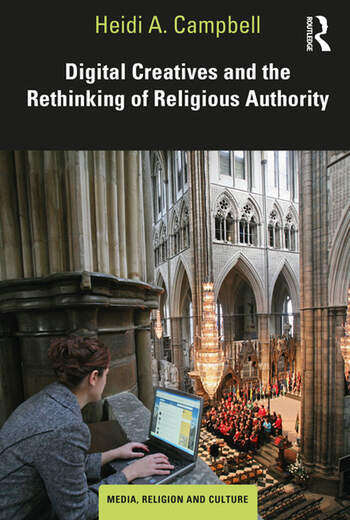 Digital Creatives and the Rethinking of Religious Authority

Much speculation was raised in the 1990s, during the first decade of Internet research, about the extent to which online platforms and digital culture might challenge traditional understandings of authority, especially in religious contexts. Digital Creatives and the Rethinking of Religious Authority explores the ways in which religiously-inspired digital media experts and influencers online challenge established religious leaders and those who seek to maintain institutional structures in a world where online and offline religious spaces are increasingly intertwined. In the twenty-first century, the question of how digital culture may be re-shaping notions of whom or what constitutes authority is incredibly important. Questions asked include:

This book reflects on how digital media simultaneously challenges and empowers new and traditional forms of religious authority. It is a gripping read for those with an interest in Communication, Culture Studies, Media Studies, Religion/Religious Studies, Sociology of Religion, Computer-mediated Communication, and Internet/Digital Culture Studies.

Chapter 1: Investigating Approaches to the Study of Authority

Conclusion: Rethinking Authority Through the Work of Religious Digital Creatives

is a professor at the Department of Communication and an Affiliate Faculty in the Religious Studies Interdisciplinary Program at Texas A & M University, USA.

Digital Creatives and the Rethinking of Religious Authority