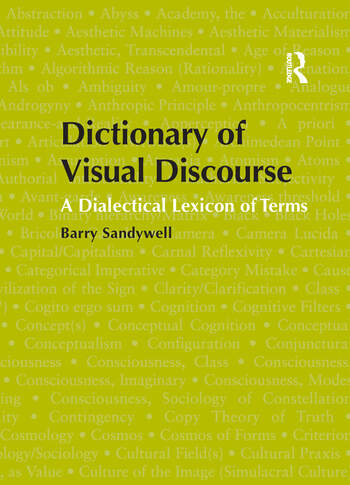 Dictionary of Visual Discourse: A Dialectical Lexicon of Terms

This substantial and ambitious dictionary explores the languages and cultures of visual studies. It provides the basis for understanding the foundations and motivations of current theoretical and academic discourse, as well as the different forms of visual culture that have come to organize everyday life. The book is firmly placed in the context of the 'visual turn' in contemporary thought. It has been designed as an interdisciplinary or transdisciplinary introduction to the vocabularies and grammars of visuality that inform thinking in the arts and humanities today. It also offers insight into the philosophical frameworks which underpin the field of visual culture. A central theme that runs throughout the entries is the task of moving away from a narrow understanding of visuality inherited from traditional philosophy toward a richer cultural and multi-sensorial philosophy of concrete experience. The dictionary incorporates intertextual links that encourage readers to explore connections between major themes, theories and key figures in the field. In addition the author's introduction provides a comprehensive and critical introduction which documents the significance of the visual turn in contemporary theory and culture. It is accompanied by an extensive bibliography and further reading list. As both a substantive academic contribution to this growing field and a useful reference tool, this book offers a theoretical introduction to the many languages of visual discourse. It will be essential reading for graduate students and scholars in visual studies, the sociology of visual culture, cultural and media studies, philosophy, art history and theory, design, film and communication studies.

Barry Sandywell is Honorary Research Fellow in Social Theory in the Department of Sociology at York, UK. He is the author of Logological Investigations (1996), a multi-volume work on the history of reflexivity, alterity and ethics in philosophy and the human sciences: Reflexivity and the Crisis of Western Reason (volume 1), The Beginnings of European Theorizing: Reflexivity in the Archaic Age (volume 2), and Presocratic Reflexivity: The Construction of Philosophical Discourse (volume 3). He is also the co-editor of Interpreting Visual Culture: Explorations in the Hermeneutics of the Visual (1999) and of essays on Baudrillard, Bakhtin, and Benjamin and other theorists published in various journals and collections. Recent publications include essays on digitalization, cyberspace, new media and global criminality as part of a continuing programme of research concerned to map the reflexive transformations of postmodern societies and cultures. He is currently editing (with Ian Heywood) an original collection of essays with the title Handbook of Visual Culture which will be published by Berg in 2011.

'Far more than just a dry compilation of standard definitions, Barry Sandywell’s Dictionary of Visual Discourse is a boldly ambitious exercise in the verbal reconstitution of a field. Idiosyncratic, learned, rigorous, and utterly original, it is destined to become an invaluable resource in the library of anyone struggling to make sense of the interdisciplinary world of visual culture studies'. Martin Jay, University of California Berkeley, USA

'With this book Sandywell has made a storming intellectual intervention into the field of visual studies. It will be difficult for anyone working within this arena in the future to avoid reference to this outstanding work'. Professor Chris Jenks, Vice Chancellor and Principal, Brunel University, UK

'Sandywell's "dialectical lexicon" of terms relevant to the study of visual culture is highly unusual, far exceeding in scope and depth the application to a limited range of familiar visual topics ideas and themes somewhat narrowly derived from cultural studies. The work is very ambitious, ranging across the role played by notions and practices of "vision" and "envisioning" in philosophy, social theory, and cultural theory, persuasively arguing that a phenomenon as important as the visual culture of late modern societies requires such a radical analysis. Sandywell pulls off the challenge in this lucid, adventurous, rewarding, and original work'. Ian Heywood, Lancaster University, UK

'...Definitions are comprehensive, historically rich, and full of references that will assist readers in understanding and applying entries. Sophisticated and challenging... will be valuable for students and scholars in social sciences, philosophy, and the visual arts... Highly recommended. Lower-division undergraduates and above.' Choice

'This work will appeal most readily to those working in the visual, textual, and philosophical areas of knowledge and exploration. It will be of special interest to faculty and those pursuing graduate studies in those disciplines.' American Reference Books Annual

Dictionary of Visual Discourse: A Dialectical Lexicon of Terms