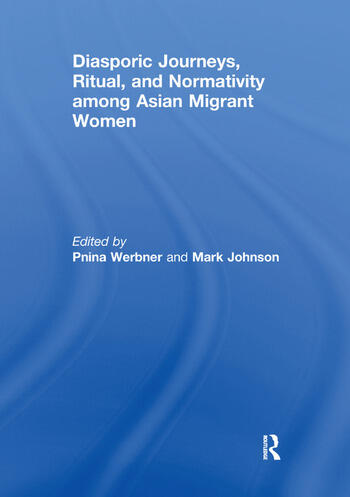 The power of embodied ritual performance to constitute agency and transform subjectivity are increasingly the focus of major debates in the anthropology of Christianity and Islam. They are particularly relevant to understanding the way transnational women migrants from South and South East Asia, Christians, Muslims and Buddhists, who migrate to Asia, Europe and the Middle East to work as carers and maids, re-imagine and recreate themselves in moral and ethical terms in the diaspora.

This timely collection shows how women international migrants, stereotypically represented as a ‘nation of servants’, reclaim sacralised spaces of sociality in their migration destinations, and actively transform themselves from mere workers into pilgrims and tourists on cosmopolitan journeys. Such women struggle for dignity and respect by re-defining themselves in terms of an ethics of care and sacrifice. As co-worshippers they recreate community through fiestas, feasts, protests, and shared conviviality, while subverting established normativities of gender, marriage and conjugality; they renegotiate their moral selfhood through religious conversion and activism. For migrants the place of the church or mosque becomes a gateway to new intellectual and experiential horizons as well as a locus for religious worship and a haven of humanitarian assistance in a strange land.

This book was published as a special issue of the Asia-Pacific Journal of Anthropology.

Introduction  Part 1: Spiritual Sojourners and Religious Journeys  (a) Ritual and Performance  1. Popular Religiosity and the 'Transnational Journey': Inscribing Filipino identity in the Santo Niño Fiesta in New Zealand  2. Becoming Pilgrims in the ‘Holy Land’: On Filipina Domestic Workers’ Struggles and Pilgrimages for a Cause in Israel  3. Buddhism by Other Means: Sacred Sites and Ritual Practice Among Sri Lankan Domestic Workers in Jordan  (b) Experiences of Conversion, ‘Difference’ and Transnationalism  4. Explanation is Not the Point: Domestic Work, Islamic Da’wa and Becoming Muslim in Kuwait  5. Telling Tales of Migrant Workers in Hong Kong: Transformations of Faith, Life Scripts, and Activism   6.  A Transnational Pig: Reconstituting Kinship Among Filipinos in Hong Kong  (c) Religious Institutions as Havens: Gender and Normativity  6. The Catholic Church in the Lives of Irregular Migrant Filipinas in France: Identity Formation, Empowerment and Social Control  7. 'I need work!': The Multiple Roles of the Church, Ranking and Religious Piety Among Domestic Workers in Egypt  8. Erasure of Sexuality and Desire: State Morality and Sri Lankan Migrants in Beirut, Lebanon  Part 2: Ethical claims, Intimacy and the Limits of Normativity  9. Filipino Women Workers in Saudi: Making Offerings for the Here and Now and the Hereafter  10. "They think we are just caregivers": the Ambivalence of Care in the Lives of Filipino Medical Workers in Singapore  11. Diasporic Dreams, Middle-Class Moralities and Migrant Domestic Workers Among Muslim Filipinos in Saudi Arabia.  13. Afterword  Martin Manalansan IV

Pnina Werbner is Professor of Social Anthropology at Keele University.

Mark Johnson is Senior Lecturer in Social Anthropology at The University of Hull.