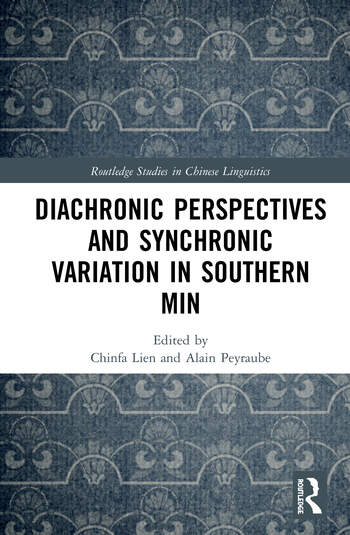 The Sinitic languages show divergence not only in phonology but also in grammar. Together with Hakka, Yue and part of Wu, Min forms the two major Southern groups of Far Southern and Southeastern languages. There is a range of grammatical phenomena in Southern Min addressed here; the themes and theoretical issues covered in this book touch on a wide range of grammatical patterns of Southern Min from both synchronic and diachronic perspectives including comparatives, obligative and dynamic modals, formation of coordinate conjunctions from the comitative marker, the benefactive marker, the rise of the continuative aspect marker, grammaticalization of the verb of saying into a complementizer and purposives in Southern Min.

This book is aimed at researchers and scholars working on and interested in Chinese linguistics.

2. Comparatives of inequality in Southern Min: a study in diachronic change from 15th to 21st centuries

3. The emergence of obligative modal tioh8 in Southern Min: a change induced by semantic-pragmatic factors

4. Negation of dynamic modals with DIT 得 in Hainan Min

5. Word change and language change: a case of 共 as a coordinating conjunction from Archaic Chinese gòng 共 to ka7 共 in Taiwanese Southern Min Lin

8. The etymology and grammaticalization of the continuative aspect marker le(h)4: a survey from the historical documents

9. Kong2 as a verb for saying 'on the move' in Taiwanese Southern Min

Chinfa Lien and May Wang

Chinfa Lien (連金發) is Chair and Emeritus Professor at the Graduate Institute of Linguistics, National Tsing Hua University, Taiwan. He publishes widely from a synchronic and diachronic perspective focusing on functional categories such as demonstratives, pronouns, modals, negation, and aspect as well as grammatical constructions such as interrogatives, exclamatives, and imperatives in Southern Min.

Alain Peyraube is Emeritus Director of Research at the Centre National de la Recherche Scientifique (CNRS, Paris, France) and Chair Professor of Chinese Linguistics at the École des Hautes Etudes en Sciences Sociales (EHESS, Paris, France). As a specialist in Chinese historical syntax and more recently on linguistic typology of Sinitic languages, he has authored five books and around two hundred articles. His latest research has been done within a broadly functional and cognitive framework from a cross-linguistic perspective.