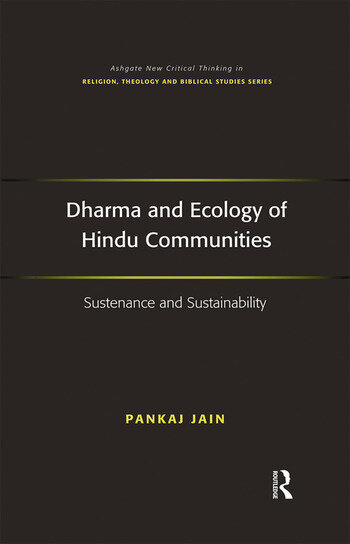 Dharma and Ecology of Hindu Communities: Sustenance and Sustainability

In Indic religious traditions, a number of rituals and myths exist in which the environment is revered. Despite this nature worship in India, its natural resources are under heavy pressure with its growing economy and exploding population. This has led several scholars to raise questions about the role religious communities can play in environmentalism. Does nature worship inspire Hindus to act in an environmentally conscious way? This book explores the above questions with three communities, the Swadhyaya movement, the Bishnoi, and the Bhil communities. Presenting the texts of Bishnois, their environmental history, and their contemporary activism; investigating the Swadhyaya movement from an ecological perspective; and exploring the Bhil communities and their Sacred Groves, this book applies a non-Western hermeneutical model to interpret the religious traditions of Indic communities. With a foreword by Roger S Gottlieb.

Pankaj is the author of Dharma and Ecology of Hindu Communities: Sustenance and Sustainability (May 2011) and has also published articles in journals such as Religious Studies Review, Worldviews, Religion Compass, Journal of Vaishnava Studies, Union Seminary Quarterly Review, and the Journal of Visual Anthropology. He also contributes to the Washington Post’s forum On Faith and e-zine Patheos.com. His research and teaching interests include Hinduism, Jainism, environmental ethics, Indian films, Sanskrit, and Hindi/Urdu languages and literatures. Before joining UNT, he taught at North Carolina State University, Rutgers, Kean, and New Jersey City University. Interested in connecting ancient practices with contemporary issues, he is exploring the connections between religious traditions and sustainability in Hindu and Jain communities in the North Texas area. He serves as a research affiliate with Harvard University’s Pluralism Project and as scholar-in-residence with GreenFaith. He is also a Roving Professor at the Center for the Study of Interdisciplinarity at UNT.

Book Prize: Winner, DANAM-TakshaShila Book Award for excellence in Indic Studies, 2012. 'This new book by Pankaj Jain is a major contribution to the growing literature on issues related to religion and ecology in India. His thoughtful treatment of three different groups -- the Bishnoi, Bhil, and Swadhyaya Movement -- helps us understand how the religious actions and beliefs of certain communities can contribute to environmental protection without ever calling it that. The book is rich in detail and places before the reader materials that will prove useful in reflecting further on the particular nature of cultural resources available in India today for resisting environmental degradation.' David Haberman, Indiana University, USA 'Pankaj Jain describes the spiritual movements in India, the Swadhyaya of Gujarat and Maharashtra and the Bishnoi of Rajasthan, that have environmentally friendly teachings. Significantly, neither is self-consciously environmentalist�; the care for trees, animals, and the cosmos is part of a wider concern for moral treatment of all beings. Yet they have done wonders for the environment. Over 300 Bishnoi women were martyred trying to protect trees in the 18th century. Dr. Jain has done serious studies of these two groups, and reports insightfully and in detail on their lives and theologies. He provides an extremely important new account of groups whose religious beliefs need to be considered very seriously in today’s environmentally-challenged world.' Gene Anderson, University of California, Riverside, USA 'Pankaj Jain has brought to light little-known aspects of how diverse traditional communities in India sustain and maintain a lifestyle attuned to the rhythms of nature. By illuminating the tree planting initiatives of the Swadhyayis, the animal protection activism of the Bishnois, and the simple lifestyle of the Bhils, Jain advances our knowledge of environment in India without sentimentalizing or idealizing practical realitie

Dharma and Ecology of Hindu Communities: Sustenance and Sustainability