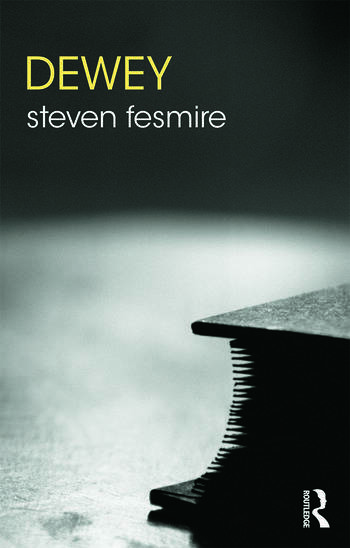 John Dewey (1859 - 1952) was the dominant voice in American philosophy through the World Wars, the Great Depression, and the nascent years of the Cold War. With a professional career spanning three generations and a profile that no public intellectual has operated on in the U.S. since, Dewey's biographer Robert Westbrook accurately describes him as "the most important philosopher in modern American history."

In this superb and engaging introduction, Steven Fesmire begins with a chapter on Dewey’s life and works, before discussing and assessing Dewey's key ideas across the major disciplines in philosophy; including metaphysics, epistemology, aesthetics, ethics, educational philosophy, social-political philosophy, and religious philosophy.

This is an invaluable introduction and guide to this deeply influential philosopher and his legacy, and essential reading for anyone coming to Dewey's work for the first time.

Steven Fesmire holds a joint appointment as Professor of Philosophy and Environmental Studies at Green Mountain College in Vermont, USA. He is the author of John Dewey and Moral Imagination: Pragmatism in Ethics (2003), winner of a 2005 CHOICE "Outstanding Academic Title" award. He is editor of the Oxford Handbook of Dewey (forthcoming 2017) and is preparing a manuscript titled Ecological Imagination: Essays in Practical Ethics and Education. He was a 2009 Fulbright Scholar at Kyoto University, Japan, and a 2016 Fellow at the Institute for Advanced Studies in the Humanities at the University of Edinburgh, Scotland.

'Evenhanded and charitable throughout, this introduction avoids the easy dismissal and well-intentioned adulation that often plagued assessments of Dewey’s work throughout the 20th century. … This book is superb in showing the interconnectedness of Dewey’s philosophy, with each chapter building on the ideas developed in previous ones. … In summary, this introduction is a rich and thought-provoking walk through the philosophy of Dewey, which will surely benefit both students and scholars alike. Summing Up: Essential. All readers.' - J. A. Fischel, CHOICE

'Fesmire demonstrates the vital relevance of Dewey’s ideas today, not only for philosophers but for anyone willing to think hard about the problems of our times. Lucid, informed, and admirably wide-ranging, this book is a superb introduction to the many-sided reflections of America’s greatest philosopher.' - Philip Kitcher, Columbia University, USA

'Fesmire has done an exemplary job of making Dewey accessible to readers who may have little or no background in philosophy. His account is highly accessible and rich in relevant, contemporary examples.' - Larry A. Hickman, Director: Center for Dewey Studies, Southern Illinois University - Carbondale, USA

'Students of Dewey who read this book will come away with an understanding of his philosophy in the round. The key concepts that bring coherence to his writing over seventy years are communicated in an approachable, yet nuanced way which provides a fresh and masterful analysis for all those interested in Dewey studies, the new and the well-initiated alike.' - Molly Cochran, Oxford Brookes University, UK

'A crisply written, deftly argued introduction to the thought of John Dewey. Fesmire has taken Dewey's oceanic philosophy and presented it with the clarity of constellations in the winter night sky. He balances a broadly informed historical perspective with keen concerns for contemporary social and ecological issues revealing the bearing and limitations of Dewey for our times.' - Thomas Alexander, Southern Illinois University - Carbondale, USA

'Fesmire provides an exploration of Dewey’s philosophy that the novices will prize as a clear, concise and comprehensive introduction, and that experts will respect for its depth of insight and understanding.' - Jim Garrison, Virginia Tech, USA

'This book fills an important role in making Dewey teachable in a variety of contexts. Not only will it be informative to students of American philosophy, it also provides a way to include Dewey in more general philosophy courses. Fesmire does an admirable job of presenting Dewey in a way that allows the reader to see how Dewey's views on central philosophical issues compare with other more commonly read philosophers. This is a valuable resource.' - Erin McKenna , Pacific Lutheran University, USA