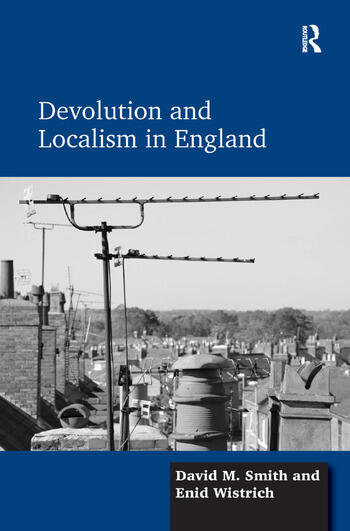 Devolution and Localism in England

Combining historical and policy study with empirical research from a qualitative study of regional elites this book offers an original and timely insight into the progress of devolution of governance in England. With particular interest in how governments have tried and continue to engage English people in sub-national democratic processes while dealing with the realities of governance it uses in-depth interviews with key figures from three English regions to get the ’inside view’ of how these processes are seen by the regional and local political, administrative, business and voluntary sector elites who have to make policies work in practice. Tracing the development of decentralisation policies through regional policies up to and including the general election in 2010 and the radical shift away from regionalism to localism by the new Coalition Government thereafter the authors look in detail at some of the key policies of the incumbent Coalition Government such as City Regions and Localism and their implementation. Finally they consider the implications of the existing situation and speculate on possible issues for the future.

David M. Smith was appointed Professor of Sociology at Middlesex University in 1992. His early research interests were in Mass Media, Youth Policy, Higher Education Policy and Ethnic Minority rights in Europe. He retired early from teaching and his University Management post in 2006 following serious illness and became Emeritus Professor while continuing his research activities mainly through the Social Policy Research Centre. He is currently in the School of Law. Enid Wistrich was Reader in Politics at Middlesex University when she retired from teaching in 1994. Her original research interests were in London government reorganization, transport policy and politics. She was appointed a Visiting Academic in 1995, and then Visiting Professor of Politics and Public Administration in 1997. David Smith and Enid Wistrich have undertaken research together since 1996 in the fields of immigration, migrants and ethnicity (funded by the European Commission DG V and the European Cultural Foundation), and regional identity in Europe (funded by the James Madison Trust). This work has resulted in a number of books, academic publications and conference papers. Their current research, culminating in this book, has been funded by the James Madison Trust.

’This book succeeds admirably in its task of making sense of the confused and sometimes confusing debate about local government� in this country. It shows how careful analysis and extensive fieldwork can be combined to produce an outcome that is both well-researched and intellectually illuminating.’ Brendan Donnelly, Federal Trust, UK ’Devolution to Northern Ireland, Scotland and Wales has created a new constitutional balance within the United Kingdom. England, with its highly centralized and at times dysfunctional system of governance, is the outstanding problem. This timely publication examines possible solutions - decentralization, regional government, city regions and localism - based on detailed surveys and empirical evidence.’ Stanley Henig, University of Central Lancashire, UK 'Tracing the development of decentralisation policies through regional policies up to and including the 2010 General Election and the radical shift away from regionalism to localism by the new Coalition Government thereafter, the authors consider some of the key policies of the incumbent Coalition Government such as City Regions and Localism. This book is a much-needed contribution to the debate about the UK’s constitutional future ... it should be required reading for all those opining on the ’English question’, to learn from the best practice of previous attempts at devolution, and avoid the pitfalls.' LSE Review of Books

Devolution and Localism in England